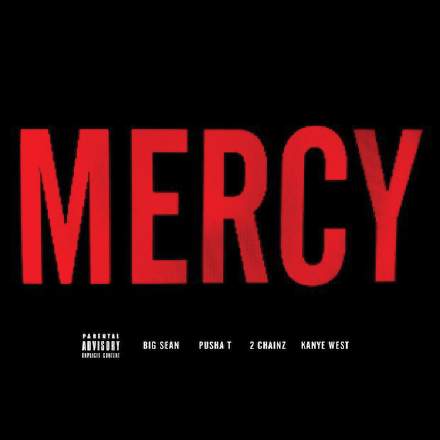 A recent chart topper in Billboard’s rap division, this track epitomises what I consider to be one of hip-hop’s greatest strengths — its ability to convincingly glue together collections of disconcerting and/or potentially conflicting sonic elements, primarily through sheer force of ego! Ask yourself this: what do quotations from the Book Of Revelation have to do with four rappers figuratively waving their dicks around? Not a great deal, frankly, but Kanye West’s unflinching transplant of those well-known biblical phrases into his home turf encourages you to make them subservient to his own lyrical message. Perhaps the “weeping and moaning and gnashing of teeth” is the expected response of less accomplished rappers? Or people with less money? Or general ‘haters’? Or maybe the words relate to something else entirely amongst your own unique associative baggage? In the end, it doesn’t matter a great deal whether there’s any categorical answer, because it’s the wealth of possible alternate interpretations that seems to me to lend hip-hop music a good deal of its emotional depth — much as the ambiguities of punning and double entendre frequently enrich the rapped lyrics.

What really blows me away here, though, is the stunt West pulls for his own verse — borderline lunatic, musically speaking, but no less admirable for that! For a start, it’s such a complete departure from everything we’ve heard before that it might as well be a different track: no C#-A-G# riff, a different kick, a different bass, different (and indeed mobile) chords, and of course Kanye’s distinctly contrasting rap style and vocal tone. But, in addition, the chords themselves are so stubbornly directionless that their effect ends up being rather unnerving — almost menacing, in fact, in an ’80s slasher movie' kind of way. What I love about stuff like this is that it’s doesn’t try to make musical sense, demonstrating instead how showmanship, shock value and tangential production hooks can still carry the record regardless.