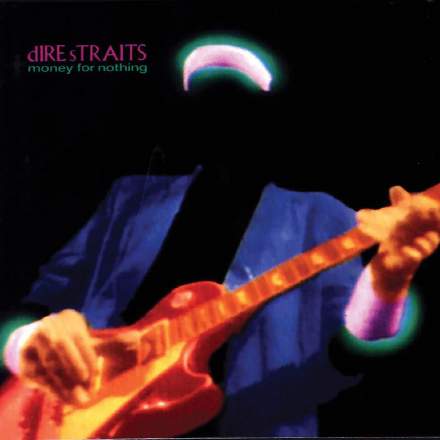 Upon reading this Sound On Sound magazine article, I was gratified to discover that the instantly recognisable recorded sound of Mark Knopfler’s static-wah guitar on this production was serendipitous. “I remember… heading out into the room to move the mics around,” recalls engineer and co-producer Neil Dorfsman, “and Mark’s guitar tech Ron Eve getting on the talkback and telling me not to touch anything because it sounded amazing as it was. One mic was pointing down at the floor, another was not quite on the speaker, another was somewhere else, and it wasn’t how I would want to set things up — it was probably just left from the night before, when I’d been preparing things for the next day and had not really finished the setup.” It’s a salient reminder of the power of the happy accident, and encourages us all to avoid getting too wedded to our ‘standard’ recording techniques.

However, I suspect this anecdote also demonstrates the simple wow factor of stereo width. Examining the waveforms of the solo guitar intro (1:36-1:49), you can see a clear time offset between the left and right channels, which naturally generates a Haas Effect-based image-width enhancement. Counteract this widening effect with a short left-channel delay (8.88ms by my reckoning) and the guitar immediately becomes rather more mundane. This inter-channel time offset also plays havoc with the guitar in mono, where it really takes a dive in the balance compared with the keyboards — with the result that the production sounds a whole lot less ‘rock’ and more ‘synth pop’ on single-speaker playback devices. It’s also interesting to speculate where that third microphone was, because it sounds like there’s a bit of a slapback delay going on just in the right channel. Given that the delay time feels something like 40ms, I’d guess that this might be the third mic we’re hearing, perhaps one of the stereo room mics left open by mistake on the other side of the room, judging by the setup diagram in that Sound On Sound feature.

Speaking of the drums, the panning of the toms has me scratching my head, but not because they’re positioned off to each side of the panorama, putting them miles away from the hi-hat. Super-wide ‘Hey, it’s stereo!’ toms were all the rage in the ’80s, after all. What puzzles me is why the lower toms are on the same side as the hat, given that few drummers would set up their kit that way. Answers on a postcard, please…

Sting’s cameo backing harmony is worth a bit of scrutiny. These days it’s pretty common to edit backing vocals so tightly that they’re more like backing shadows — supporting, but always subservient to, the lead. Here, however, the backing vocalist was an equally big star in his own right, and one of the most recognisable singers of his generation, so this approach would patently have been counter-productive. The decision to drop the lead vocal and feature only the harmony for most of the second chorus, which most popular songwriters would consider borderline insane, becomes a canny commercial move! Similarly, the increasing deviation between the two vocal lines as the song progresses (such as from 4:19-4:24) continues to appeal strongly to both fanbases. That said, the cross-promotional biscuit is most thoroughly taken by Sting pilfering the tune of his own song ‘Don’t Stand So Close To Me’ (one of the Police’s biggest hits) for ‘I want my MTV’. Kerching!