More Hearts Than Mine 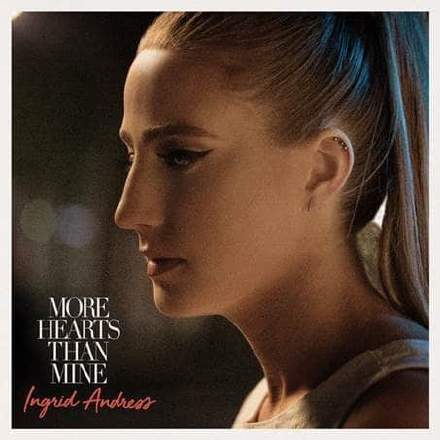 In a sense, this song from Best New Artist Grammy nominee Ingrid Andress feels so conventional that it’s almost a country ballad by numbers, but it reploughs its well-worn furrow so exquisitely that I’d encourage any student of production to pull it apart bit by bit, because it provides so many archetypal examples of tried-and-true song-writing, arrangement, and production techniques.

Harmonically, there’s nothing but I, IV, V, and vi here, but the progressions wring great value out of them nonetheless. So even though the verses are just a root-position pattern I-vi-IV-V, there’s a nice 6-4 to 5-3 double suspension providing a touch more harmonic tension on the fourth chord, and that hint of faster harmonic rhythm carries into the chorus’s subsequent chord-per-bar pace. And although the chorus relies on the same basic I-V-vi-IV progression that everyone and their dog seems to be flogging at the moment, it’s lent a little freshness by using the variant starting on the subdominant (ie. IV-I-V-vi). And it’s not allowed to outstay its welcome, either, because after two iterations, another harmonic chestnut closes out the chorus: an interrupted cadence of IV-V-vi echoed by a perfect cadence IV-V-I.

The structure’s as vanilla as they come too (intro, verse, verse, chorus, verse, chorus, middle section, chorus), but with some lovely little touches to avoid a sense of rigidity: just a two-bar intro; an extra bar before the second chorus and a four-bar middle section just to gently ruffle the feathers of the comfortably prevailing eight-bar norm; and a two-bar extension to the final chorus to close out the song as a whole.

The arrangement has plenty of old stand-bys in it as well. The opening quarter-note piano intro is almost too much of a cliché to take, in fact, but its brevity is its saving grace (If there had been eight bars of it, I swear I might not have made it to the start of the first verse!), as well as the chord omitted at the end of bar two. Then we get a classic arrangement-build formula. Vox and piano alone for Verse 1. Muted drums and guitar details joining for Verse 1 at 0:29. Strummed guitar, pads, and a suspicion of bass for Chorus 1 at 0:53, as well as epic tambourine-verb on every second backbeat. Proper bass and drums entry for Verse 2 at 1:32. More padding, cymbal swells, backing harmonies, and a return of The Tambourine Of Eternity for Chorus 2 at 1:55. The middle section’s swelling guitar solo and wordless vocal ululation building into an archetypal drop-chorus at 2:42, with gently stomping bass/drums ramping up into the full-band texture’s return four bars later at 2:54. Then, as expected, Ingrid adds intensity by adding a few higher-register embellishments to the chorus melody we’ve already heard twice before, and naturally the song ends with skeleton guitar/piano chords and a final breathy delivery of the title hook.

Not that any of this is a bad thing. After all, sometimes there’s nothing more welcome than familiar comfort food. Furthermore, what really elevates this production for me is that every one of these standard devices is delivered with such craft and taste that it’s not just any old comfort food – it’s lasagne as only your grandma can make it, after you’ve hiked to her cottage through twenty miles of windswept heather! Let me give just one example of what I mean: those cymbal swells first heard in the second chorus. Listen more carefully and you’ll notice that the first is underpinned by a rumbling low-frequency transition effect at 1:55, which then reappears almost subliminally on its own four bars later at 2:07. But then this LF layer remains absent from the next three cymbals (2:19, 2:31, and 2:41), saving its (literal!) thunder for the arrival of Chorus 3 at 2:54. No-one’s reinventing the wheel here, but the cumulative effect of everything, but everything, working unfussily towards a common musical goal makes the sum total a thing of beauty. Conventional beauty, but unquestionably beauty nonetheless.

I confess, though, that I’ve rather buried the lead here. You see, for all its manifestly quality craftsmanship, I still think this song could easily have been fundamentally missable. And (to be totally honest) I don’t think the vocal performance on its own would have elevated it to ‘essential listening’ status either – that’s just as conventionally well-crafted and buffed as the rest of the production. What makes this song shine is the lyric, which is simply fabulous! After 10 years of writing these critiques, I’d perhaps be forgiven for some cynicism, but this song honestly had me welling up. While doing the hoovering! And within that context it seems to me that the production is perfectly adapted to the purpose of providing the highest-quality frame to a stunning picture.

One thing that really stood out lyrically was the way Andress and her co-writers so often managed to pack a wealth of meaning and implication into just a few words. Take a line like “pack a shirt for church, because we’ll go”. On the face of it, it just indicates her family’s traditional religious values, but the fact that the narrator’s warning her boyfriend of this before they visit shows that:

And that’s besides any imagery the phrase conjures to mind of packing up and travelling, where most of us already have strong memories we can relate to. It’s extraordinarily efficient communication, so it’s little wonder that the song can take us on such a long journey all the way from the first family visit right through to the ramifications of eventual break-up.

The complexity of the emotional characterisation is also remarkable. It’s the recurring chorus line about the father that slays me in this respect. In the opening choruses the girl clearly recognises that her Dad’s gruffly hiding his affection for the boyfriend by pretending not to like him. But then once father and daughter have presumably broken down that facade later in the song, the boyfriend then dumps her and the father falls back on a similarly flimsy pretence that he never really liked the boyfriend anyway. It’s layers upon layers upon layers. Truly masterful work.

But if I can wrench myself out of my reverie, there’s one more interesting technical matter to point out. If you look at the song’s waveform below, you’ll notice that there appears to be some kind of peak limiting on the verses (at about -1dBFS to be specific), but not on the subsequent chorus in each case.

Now, there’s another time-worn trick, this time at the mastering stage, whereby you bring the level of the verses down by maybe a decibel to give the choruses relatively more of a sense of impact. However, what’s curious here is that most mastering engineers would do these rides before the signal reached the mastering limiter, in order to maintain maximum signal dynamics, whereas the reduced peak level in this case suggests that the level rides were actually implemented after the file had already been limited. So did the mixing engineer deliver a limited mix to mastering, or did the mastering engineer goof? (OK, if you twist my arm, I’ll go for the former, since it was Manny Marroquin at the mixing desk for this song, and some of the waveforms from his past mixes suggest to me that this wouldn’t be the first time he’s mixed through used mastering-style loudness processing…)