Baby Love
The Supremes
Back to Top
Classic Mix

My Heart Will Go On 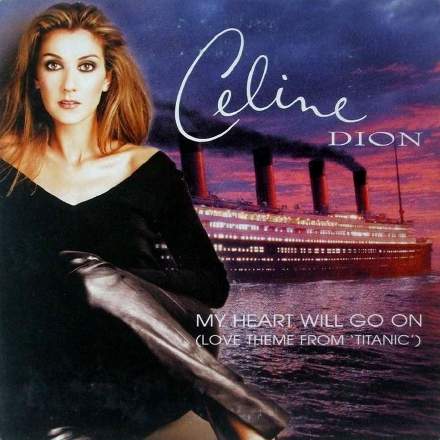 Whether or not the overbearing sentimentality of this production makes you want to throw up (a view apparently expressed, somewhat richly, by Kate Winslet, lead actress in the overbearingly sentimental film the song accompanies), it does feature a corking final-chorus key change that’s rarely been paralleled in mainstream pop. Taking us from E major (four sharps) to Ab major (four flats), it’s at once profoundly unsettling and yet somehow surprisingly logical, and therefore demands the scrutiny of any student of popular harmony.

Personally, I think its secret ingredient is actually melodic more than anything, though, the result of two opposing scales working in opposition: the falling scale in the bass ( C#-B-A-G#-F#-F-Eb-Db), which covers a complete octave; and the rising tin whistle line ( B-C#-D-E-F#-G#) which is extended a further step by dovetailing enharmonically with the opening notes of Dion’s vocal melody ( Ab-Bb). Although neither scale conforms to any traditional Western key or mode, I think it’s the implacable stepwise motion across the boundary that’s largely responsible for smoothing such a stark key change.

Which brings me to the issue of the song’s two versions: one from Titanic’s soundtrack, with a more restrained arrangement and comparatively understated vocal levels; and the second slightly shorter one from Dion’s album Let’s Talk About Love, with more upfront lead vocal and various pop-centric arrangement alterations. For my money, the former makes a considerably better job of the key change, on two counts. Firstly, it plants that falling five-note bass line in the listener’s consciousness in both of the preceding choruses (at 1:09 and 2:28 respectively), where the other version sticks to more conventional lines. And, secondly, it features the rising whistle line more prominently in the mix, strengthening its melodic linking effect. By contrast the ‘pop’ version tries to conjure momentum more by textural means, using a big drum fill and a blend of percussion swells, but I think that rings a bit hollow by comparison.

I like the soundtrack’s lower vocal level too, not because I’m as offended by Celine’s melodramatic vocal stylings as many of my colleagues, but simply because the backing track’s opulent sonics become easier to appreciate — check out the lashings of 20-40Hz sub-bass, for instance, or the rhythmic 16th-note slapback-style pre-delay on the side-stick reverb from 1:41. That said, I do marginally prefer the verse harmonies in the pop version, which establish the major mode more firmly with Bb-Eb cadences, setting the repeated Bb-C#m interrupted cadences of the chorus in sharper relief. My favourite harmonic turn in the pop version, though, is another modulatory moment, where a chromatic rise in the bass line gives a fleeting Bb-G-C#m cadence in the middle of the second verse.

Hey, maybe someone could do a new version putting together the best harmonies of both? Actually, on second thoughts, two versions are already more than enough…