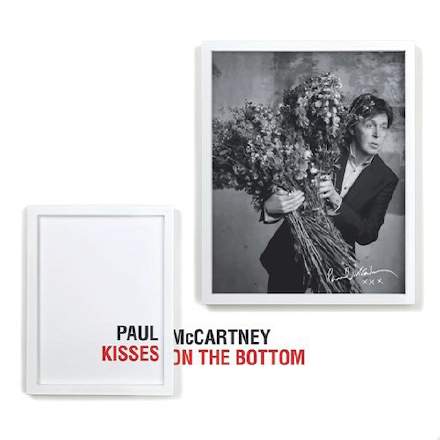 I was keen to get my paws on Paul McCartney’s latest album, Kisses On The Bottom, partly because of this recent Sound On Sound magazine article, but also because its main engineer is Al Schmitt, who’s something of a Grammy magnet as far as jazz productions are concerned. As I’d expected, the album represents an excellent benchmark for anyone making their own recordings in this style, although it will probably prove a source of considerable frustration too, because although Schmitt makes the job look easy, sonics like this are tremendously difficult to emulate, especially under budget restrictions.

A couple of aspects of the mix leap out at me in this respect, because they contrast so starkly with many small-studio records I hear. The first is the well-nigh miraculous tonal consistency of the string bass part. The big problem for more modestly financed productions is controlling low-end resonances, which can cause some notes to boom out unmusically irrespective of the calibre of the bass player. Such resonances can be inherent in the specific instrument used; they may be incurred by close-miking the wrong bit of the instrument; or they might arise from resonant modes in the structure or air-cavity of the room (a facet of acoustics that’s typically quite costly to address).

Now, I’m not about to say that string bass should be completely even, because a degree of variability is one of the things that makes the instrument feel organic. However, my experience is that home recordists, in particular, use this as an excuse for accepting compromise too readily during the setup process, and certainly the bass on this production doesn’t sound any less natural or musical to me, despite its beautifully controlled low end. Neither would I suggest dynamics processing as the answer, because anything beyond a very subtle treatment quickly compromises the openness and authenticity of this kind of ensemble sound. Indeed, Schmitt himself has frequently commented in interviews on how little compression he uses.

The second thing that I always think is so special about Schmitt’s productions is the way he captures live ensembles in a way that makes all the instruments (with the obvious exception of the string overdubs) feel quite ‘close up’ to the listener, while still managing to retain a full and well-balanced tonality. This is such a tough achievement to emulate. For example, if you put your own microphones close enough to capture the necessary intimacy for each instrument, there’s a danger of spotlighting some elements of its sound at the expense of others, whereas if you pull the mic slightly further away to get a more representative close-mic sound, spill from other sources can quickly become unpalatable.

As I understand it from Schmitt’s published interviews, one important method he uses to square this circle is to favour omnidirectional polar patterns, thereby catching more of each player from the close-miking position, as well as enriching that close-mic sound with carefully managed spill contributions from the other mics on the studio floor. Similar attempts by home-recording mortals are frequently compromised by unappealing small-room acoustics or the dodgy off-axis response of lower-cost mics, even if the engineer involved makes light work of the potentially fiendish spill- and phase-related complexities the setup process entails.

Notwithstanding this album’s many virtues, however, I have a significant grouch: surprisingly, given the high production values overall, the vocal pitching feels decidedly second-rate. It’s not that it’s out of tune as such, but rather that so many of the pitch contours sound ‘messed with’ somehow. Now I wasn’t there on the session, so maybe what I’m hearing is just the way Macca rolls these days, but I’d personally stake my last Rolo that inexpertly applied pitch-correction technology is the main culprit here.

Based on similar artifacts I’ve heard on vocals that I’ve been asked to mix, my guess is that they’ve been using one of those plug-ins that detects pitch in real time and then attempts to drag the intonation closer to a predefined scale from moment to moment. The main danger with such plug-ins is that they can unnaturally warp short-term pitch-fluctuations in a variety of ways, most of which seem to be on show during the first verse here. There are the suspiciously featureless note sustains of “she said that someday”, for instance, as well as some bursts of what could easily be artificially generated ‘canned vibrato’ on “soon” and “right”. The slightly drunken feel of “and she was right” is another key clue for me, because it sounds very like an inappropriate correction-speed setting at work — either that or the pitch-detection routine fleetingly mistracking so that it bends some corners of the pitch curve erroneously.

Maybe I’m over-sensitive to this kind of thing, being a singer myself, and perhaps the average punter just hears that the singing’s in tune without picking up anything odd besides. However, if these vocals trouble your ear like they do mine, I’d recommend steering clear of real-time detection/correction engines if you can. While it’s possible to get natural results out of some of them if you get busy automating their internal parameters to suit the needs of each phrase, frankly I’ve found that it’s easier to achieve something more organic by applying static offsets to sections of the vocal pitch contour manually. (Celemony’s Melodyne makes it very easy to do this, but you can also do surprisingly well even using simple off-line pitch-shifts on selected audio regions.) That way, you’re likely to leave many more of the micro-level nuances intact, irrespective of how far you shift each section or how much the amount of shift changes between sections.

Listening back to this after a few weeks gap, the pitch-correction only sticks out and annoys me more! Check out the odd pitch-swoops on “this love of mine” and “she appeared” too. They both just sound too odd to be real. It’s kind of like the aural equivalent of someone who’s had too much cosmetic surgery – its close enough to looking real that you can maybe delude yourself it’s OK in soft lighting, but the moment the person moves, or steps into daylight, they appear slightly freakish.

And it’s not an isolated instance just for the single, either. It’s all over the record. Here’s another pretty horrid example from ‘I’m Gonna Sit Right Down And Write Myself A Letter’ for instance: “and close with love the way you do” at 1:57-2:02, which seems to be doing some kind of very odd formant fudgery into the bargain. It’s such a shame, because I actually rather like both the fragile tone of McCartney’s voice and the rest of the production overall, and this stuff undermines my enjoyment of it.

And while we’re talking about odd edits, there’s a moment that sounds very much like a clunky bit of editing between takes at 1:13 in ‘It’s Only A Paper Moon’. Have a listen for yourself, but there’s something that doesn’t sound natural about that transition at all.