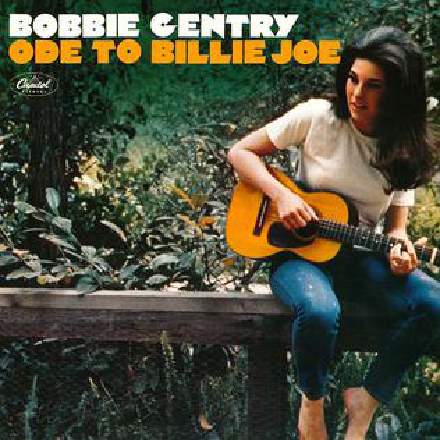 As a podcast creator arriving at the party just as the Zeitgeist seems to be fetching its coat, I’ve been bingeing my way through various celebrated music-related series, and can thank Tyler Mahan Coe’s Cocaine & Rhinestones for introducing me to this classic country single by Bobbie Gentry. It seems that the song’s main acoustic guitar and vocal parts were just a demo recording Gentry did for Capitol Records, but that the label loved the performance, so hired top arranger Jimmie Haskell to flesh it out with some strings. That chart netted him the first of his three Grammies (the others being for Simon & Garfunkel’s 'Bridge Over Troubled Water' and Chicago’s ‘If You Leave Me Now’), and with good reason.

Most striking, for me, is his use of dissonant chromatic notes. Right from the outset, the first violin figure at 0:03 pits its swooning C# fall-off against the clearly audible C of the guitar’s bluesy D7 chord. The ‘bass’ part (actually a pizzicato cello within the string arrangement) repeatedly delivers clashing C# and F# eighth-note decorations against the guitar’s D9 and G7 chords respectively. Right at the end of verse 2, the violins set their languorous F-to-F# violin line against the F# of the guitar’s D chord, before directly clashing their C against the bass line’s C# eighth note at 1:03. Just as the novelty of these tactics begins to fade, the end of verse 4 treats us to two new chromatic notes: the cello line’s Bb at 3:18 and, even more startlingly, the violin’s high Ab at 3:56, the latter left hanging unresolved until the production’s weird chromatic coda fills in all the remaining semitones with its asynchronous falling violin and cello lines.

The string writing also serves to underscore many aspects of the lyric. At the simplest level, the dark significance of each verse’s “off the Tallahatchie Bridge” hook is enhanced not only by the cello switching from pizzicato to sustained bowing, but also by featuring the instrument’s lowest note (its open C string), an austerely resonant sonority that appears nowhere else in the song. The high violin line in verse 3 (which avoids the C-C# clash at 1:50 and 1:58) lightens the mood as the narrator’s brother reminisces about childhood pranks; the block harmony and parallel thirds at 2:05 clearly reflect the words “after church on Sunday night”; and the richer low-register violins at 2:31 give warmth to the mother’s concern about her daughter’s loss of appetite, while the optimistic rising B-C#-D line at 2:54 hints at her ulterior motives in inviting “that nice young preacher” to dinner. But my own personal highlight is that Haskell chooses to leave the strings tacet (bar the pizzicato bass) for the song’s celebrated “throwing something off the Tallahaskie Bridge” lyrical MacGuffin, a move that I can’t help comparing with that scene in Psycho where Bernard Hermann keeps schtum as Marion’s car and its grisly cargo sink into the marsh!