'One Hand, One Heart' from West Side Story soundtrack (1961) 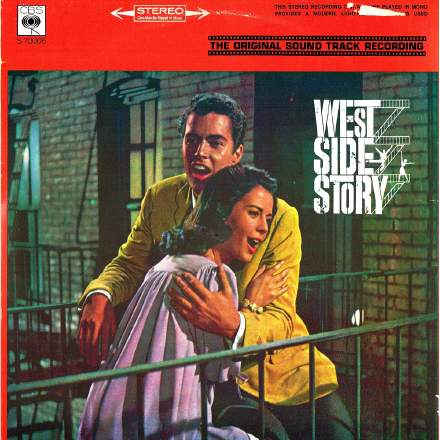 The bittersweet conjunction of Stephen Sondheim’s passing and Steven Spielberg’s lavish new film adaptation encouraged me to return to the soundtrack of this classic 1961 film. Much has been said about the musical’s pioneering book and choreography, but for me it’s always been the music that sets West Side Story head and shoulders above most other shows, masterfully bringing soaringly populist melodies and infectious Latin rhythms together with the intense thematic development and masterfully searching harmonies of the late classical tradition. Or, to put it another way: it’s that rare type of high art that leaves you whistling the tune and tapping your foot!

Funnily enough, though, it’s the most stripped-back of the songs, ‘One Hand, One Heart’, that most impresses me with its lightly-worn craft. The melody is so beautifully constructed, with the first line (“Make of our hands one hand”) subtly transforming into lines two and three, as the B of “hands” progressively rises to the C# of “hearts” and the D# of “vows”. Then the little echappée motif that appears under “one last vow” simply walks its way down stepwise for the stanza’s final line, just gently reducing the pace for the final iteration. It’s so straightforward, yet it creates an elegant registral arch from start to finish while witholding the F# root note until the very end. And the second stanza’s added line “one hand, one heart” only intensifies that same melodic arch by raising its peak to high F#.

And the harmony does a great job of supporting the melodic arch too, by all but ignoring the tonic chord after the first line’s churchy I-IV-V-I progression – yes, there’s an F# chord at the start of the third line, but it’s in second inversion, which doesn’t exactly relieve the harmonic tension. And, speaking of inversions: how often do you use chords in inverted form? Because this song uses loads of them. In the first stanza, more than half the chords are inverted, for instance, with the whole tail-end of the melodic arch floating down to earth over an unbroken string of five of them.

But my favourite harmonic stunt is the strategic use of flat-ward tonal movement to deepen the melody’s emotional impact. The first instance is the E major chord in the second line, which cancels out the key signature’s sixth sharp and fleetingly suggests a move towards B major. What I love about this is that it’s not just a random chromatic chord he uses to add depth to the lyric “one heart”, but a neat way of building the whole second line on a cohesive falling-fourths root progression ( D#-A#-E-B) while avoiding the potentially jarring dissonance of a diminished triad on E#.

But the second flat-ward move goes one notch further, with the E major and A major chords under “only death” cancelling out both the fifth and sixth sharps in the key signature. This seems like such a powerful musical foreshadowing of the plot tragedy to come (an impression somehow subtly enhanced by Sondheim’s use of “will”, rather than “can” before “part us now”), especially as it’s precisely on the word “death” that the melody line makes its first chromatic move by flattening its A# to A.

Which brings me to my favourite melodic/harmonic moment of all, which is where that same A note is reiterated as the final echappée under “us”. On the one hand, it makes so much melodic sense, because it’s just staying in the furrow already ploughed by the A on “death”. And yet, while every previous echappée has effectively anticipated a note in the subsequent bar’s chord, this final one instead generates another fabulously portentous false-relation with the A# in the tonic resolution chord under “now”. But what’s hard to believe, given the extraordinary pathos of this song, is that this is as close as we ever get to a downbeat dissonance between the harmony and melody. There simply aren’t any in the whole song: no sevenths or ninths, no appoggiaturas, no suspensions – not even an accented passing note!

Now, I mentioned the Spielberg adaptation earlier. Well, based on the spectacular-looking trailer I decided to hunt down the new film’s soundtrack version of this song for comparison. And I immediately regretted it, because the vocals have been totally steam-rollered in the pitch domain. How the hell are they expecting people to connect emotionally with such horridly mechanical confections? And the gorgeously recorded orchestral accompaniment somehow makes the semi-vocoded vocal timbres even more hideously incongruous by comparison. With hindsight, the fact that the trailer contains a grand total of just nine(!) sung words should probably have told me everything I needed to know… (Incidentally, although the 1961 movie soundtrack is the most well-known recorded version of this musical, I think I might actually prefer the more intimate version of ‘One Hand, One Heart’ on the original 1957 broadway cast recording.)