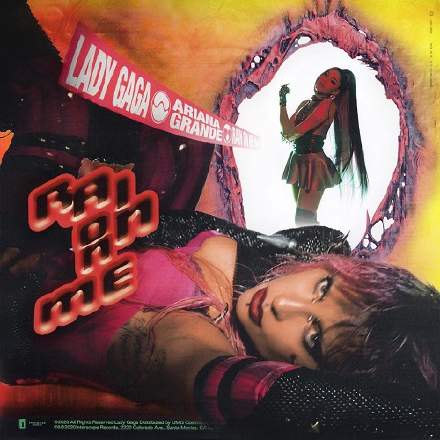 As much as I generally find it hard to warm to this dense and rather uninspiring slab of disco house, there was one thing I quite liked: the pace variations of the hook lyric. So at 0:31, the verse-ending “rain on me” gives each syllable a duration of three sixteenth notes, whereas the following chorus speeds that up to eighth notes from 0:36, and then slows it down to half notes with Lady Gaga’s spoken rendition at 0:46. We even briefly get a quarter-note version during the Ariana ad lib at 2:02. This idea of making a riff’s note values proportionally longer/shorter has been a standard compositional technique at least since the Renaissance (classical music theorists often call it augmentation/diminution), but I’ve rarely heard it used so actively in a pop production like this. So if you’re looking for a trick to set your own productions apart from the crowd, you should maybe give it a whirl too.

A snob is a failure with nothing interesting left to say. Snobbery is the poison apple of pop lyric analysis: it looks so sweet, so easy (by the Year 3000 Busted’s great great great granddaughter would be several hundred years old, so the joke’s on them!), but the the rush of talking down to a bunch of 18 year olds with more name recognition than most countries is followed by a hollow sensation, a reminder that you are completely missing the point. So before I start: the lyrics to ‘Rain On Me’ have been expertly crafted and do their job extremely well.

They also make no sense. Zero. Let’s start at the chorus, and see if we can uncover a central theme. “I’d rather be dry, but at least I’m alive. / Rain on me, rain rain. / Rain on me, rain rain.” Literal level: line one tells us rain is bad, but not fatal. Lines two and three invite lots more rain. Feels a little contradictory, but let’s press on. Metaphorical level: rain as a metaphor. Maybe the rain is hardships she faces? She’d rather be free of them, but at least they haven’t destroyed her. Why beg for more though? Or perhaps the rain is tears? But if they’re her own tears who is she asking to rain on her? Perhaps they are the tears of a friend: ‘rain on me, you can cry, let it all out’. It’s a nice sentiment, but makes the “I’d rather be dry but at least I’m alive” feel a little unfriendly – your friend is bawling on your shoulder and you tell them you’d rather this wasn’t happening, but appreciate that their grief hasn’t killed you.

So what have we got from the chorus? A song maybe addressed to the hardships of life or to a friend who’s hurting. Now let’s backtrack to verse one and see what we can glean. “I didn’t ask for a free ride. / I only asked you to show me a real good time. / I never asked for the rainfall. / At least I showed up, you showed me nothing at all.” Ok, so it sounds like we’ve got an antagonist! Definitely not a friend, this is someone who showed Gaga nothing at all, who maybe tried to imply Gaga had asked for a free ride (which she didn’t!). Let’s call him Derick. Is the song being sung to Derick? A sort of ‘Forget You’ or ‘Songs Like This diss track outing Derick as a bad guy? A verse detailing his unfair treatment of Gaga then a full-voiced anthemic chorus… asking him for more of the same? “Rain on me, rain rain.” And all of this mere seconds after insisting she’d never asked for the rainfall! So maybe a change of heart vis a vis the rain? Nope, she’d “rather be dry”.

And we could go on. I have. I threw myself into proving this song made sense, telling myself the line “Hands up to the sky, I’ll be your galaxy, I’m about to fly” didn’t sound like someone browsing through inspirational bumper stickers at a service station. And, of course, like any snob, I’d completely missed the point.

Max Martin is up there with Dave Smith and Bob Kahn in the list of people you’ve never heard of but who impact your life on a daily basis. Mr Smith invented MIDI, Mr Kahn the internet, and Max Martin the sound of modern pop. ‘…Baby One More Time’, ‘Blinding Lights’ and ‘Break Up With Your Girlfriend, I’m Bored’ are just a few of the pop hits he’s written which start with the letter ‘B’. From the Backstreet Boys to Taylor Swift, if you can name a mainstream pop star from the last twenty years, chances are he’s written one of their hits.

His lyrics, as a rule, don’t make sense. Most of us know The Backstreet Boys’ ‘I Want It That Way’. You may have even attempted it, late in a karaoke evening, swept onto stage by the cheers of friends who surely had only your best interests at heart. And maybe, like me, you spent over a decade with this song sitting happily in a little box in your head before realising it makes absolutely no sense! Having a scan through the lyrics is an exercise left for the reader, but good luck decoding what it is they want ‘that way’ and which way ‘that way’ is.

And Martin embraces this senselessness! In 2018 the Guardian asked him about the way his lyrical writing ‘undermines itself at every turn’. He beamed. “You know that’s a thing, right?” Growing up in Switzerland he fell in love with Abba and Elton John before he learnt English. “If you write a song and people are emotionally moved without understanding what’s being said. That, to me, is as powerful.” Martin didn’t write ‘Rain on Me’, but anyone working in pop will know his songs backwards and forwards. So, is everything we hear on the radio echoes of one man’s attempts to recapture the childhood joy of music without meaning? Possibly, but it also makes good commercial sense. Only 20% of us speak English, less than 10% as a mother tongue, whereas pop is global.

Case in point, some years ago I visited Siberut, a remote island in Indonesia which is home to some of the few hunter gatherer communities remaining on the planet. The journey from London was long; 30 hours of international flights, 4 hours of internal, then jeeps on unpaved roads to a dock where a small, creaky wooden boat with a spluttering outboard took us on an overnight crossing over choppy waters to a wooden jetty from which we hiked through rainforest to a hand-built longhouse where six families were gathered around a crackly radio playing the same Katy Perry hit I’d heard in the Heathrow departure lounge. If you know your audience is going to be that broad, why prioritise meaning over sound?

So, ok, when writing global pop phenomena the priority should be catchy phonetics over meaning, but what about how frustrating it is for English listeners to be bombarded with this utter nonsense? Well, if you’ll allow me to contradict the premise of this entire essay, it’s not frustrating, because they do make perfect sense. At least they do as long as you’re not reading them. Anyone hearing the song will realise that both Gaga and Arianna are powerful women, resilient in the face of adversity.

Anyone digging deeper will be frustrated because there’s nothing there – this is linguistic pointillism, the closer you look the less clear the picture gets. But complaining about that is like complaining that your quiche makes a terrible tennis racket. The more you try to demonstrate its shortcomings the sillier you look because that’s just not its job.