(I Can't Get No) Satisfaction

by The Rolling Stones 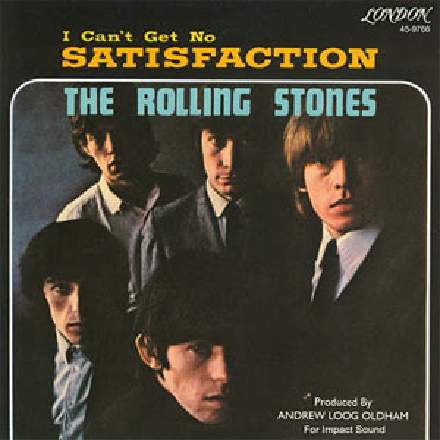 With such an iconic record, it’s easy to overlook how odd it sounds – even leaving aside the pioneering fuzzed ‘placeholder’ guitar riff that was initially just a placeholder for horns! (It only remained on the record because Jagger and Richards were out-voted by the rest of the band, the producer, and the engineer.) The drum pattern’s about as simple as it gets, with kick and snare pounding down together on every beat, and the hi-hat playing eighths over that, although you’d be forgiven for missing the latter given how diffuse the hat sounds in the mix. (Would it have been too much to ask for a hi-hat mic?) And then there’s the tambourine, which effectively sounds bigger than the whole of the rest of the backing band!

And, speaking of that F#, it makes what might have been a I-IV4-3 progression into one of the most celebrated pop/rock harmonic tropes: the bVII-IV-I falling fourths that have spawned hits like Guns ‘n’ Roses ‘Sweet Child O’ Mine', Van Morrison’s ‘Gloria’, Lynyrd Skynyrd’s ‘Sweet Home Alabama’, the end of The Beatles ‘Hey Jude’, Ray Parker Jr’s 'Ghostbusters', The Rolling Stones' later ‘Sympathy For The Devil’… the list goes on and on! Unlike those other celebrated examples, however, ‘Satisfaction’ puts one of the chords into inversion (the bVII chord’s over A in the bass), a trick you can also hear in AC/DC’s 'Back In Black', which puts its IV chord into first inversion. (The ultimate falling-fourths prize, though, has to go to Jimi Hendrix for his bVI-bIII-bVII-IV-I in ‘Hey Joe’.)

Much is often made of Richards’s guitar and Jagger’s vocals, but from a performance perspective, Charlie Watts impresses me far more here. Just marvel at how tightly the kick and snare match each other the whole way through this song – so much so that when kick drops out for a couple of beats during the exposed break after “no, no, no” (first heard at around 1:03) you hardly notice. You might think this is nothing special, but pretty much every project-studio drum performance I’ve ever mixed featuring simultaneous kick+snare hits (eg. with disco or reggae beats) has needed remedial editing to remove unintentional intermittent flams. Yes, the beat in ‘Satisfaction’ is almost childlike in its simplicity, but that only makes Watt’s performance more akin to Giotto’s O: the perfect rendition of a pure concept that indicates the practitioner’s technical mastery more forcefully than could any flashy theatrics.