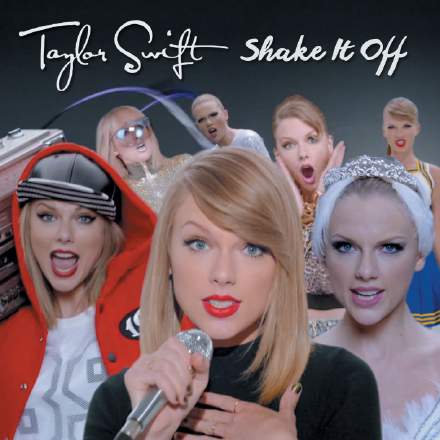 Last year I praised Taylor Swift’s wide-ranging use of speech within her song 'We Are Never Ever Getting Back Together', and she’s at it again here. I particularly liked the brilliantly goofy giggle at 0:19, for instance, and the rhythmic hiatus of “shake, shake, shake” at the end of the long, spoken middle section at 2:18-2:43. However, I also like the way the chorus’s hook line breaks the four-square sing-along rhythmic pattern established by the preceding three lines, putting an accent on the third quarter-note of the bar (assuming a tempo of roughly 160bpm), where it’s been resolutely on beats two and four throughout the preceding phrases. People often seem to spend all their time thinking about how to highlight their hook lines melodically, while neglecting rhythmic devices like this which can be equally effective.

There are plenty of great arrangement details to admire. For one thing, it’s not often that you hear such a sustained brass backing in an uptempo number like this, with many of the parts operating more as chordal padding than anything else. This gives the production something of a calling-card sound, especially when set against the rhythmic parping of the central low sax loop that underpins most of the song. Not that these backing horn parts are completely devoid of rhythmic interest, though, because there are nice fragments of rhythmic countermelody introduced in chorus two that are so clearly audible that they must surely have been assisted by fader automation at mixdown. Notice as well that the final chorus appears to have been rebalanced in favour of the higher horn lines, although whether by mix moves or by virtue of arrangement adjustments it’s tricky to tell.

And there’s a beautifully executed textbook second-verse arrangement stunt at 1:06: dropping the drums for a few bars before getting back into the normal verse texture. This is such an effective device for two reasons, I think: firstly it simply wrong-foots the listener into paying full attention to the lead vocal at a point when a whole chunk of new lyrics are about to hit; and secondly it provides more arrangement ‘headroom’ when it comes to creating a sense of build-up into the second chorus. The problem with second verses is that the listeners have already heard the verse music once before, with the result that their boredom threshold tends to be lower. So where Swift and her producers are happy to leave the first verse’s texture essentially static for around 25 seconds (0:06-0:30), in the second verse you get some arrangement change every six to seven seconds: the drums re-enter at 1:12; the call-and-response backing “dancing on my own” and “moves up as I go” backing vocals arrive at 1:19; and the harmony backing vocals join in with “know” at 1:27. And similar thinking can be heard at work in the second pre-chorus, where another stark drop occurs two bars before the chorus at 1:39.

Sadly, however, the song rather lost its shine for me once I started hearing “fakers gonna fake” as “bakers gonna bake”…

Another thing that hits me every time I listen to this track is that the lead vocal line from 2:52 through to the final chorus always seems to sound like’s it’s been stuck on as an afterthought. The main reason for this, I think, is that the amount of low midrange in the tone somehow suddenly increases there. I’d probably have multed that bit out to give it some extra low cut there – or maybe even automated an EQ, because the falsetto bits seem to suffer much more than the rest in this regard.

Also, speaking of the vocals, it’s also probably worth mentioning how vocal distortion appears to have been used pretty extensively here too. This is often justifiable on grounds of giving the vocal a fuller tone to compete with such a rich-sounding backing texture, but I have a suspicion that it might also have been a way of managing the intermittent narrowband frequency peaks that often, in my experience, tend to accompany this kind of strained vocal delivery. Such peaks result in a sporadic ‘piercing’ quality that can make it quite difficult to achieve a stable subjective tone and balance for the vocal in the mix – the slim frequency peak stabs you uncomfortably in the ear well before rest of the vocal’s frequency spectrum feels loud enough. Distortion can work as something of a remedy to this by increasing the vocal sound’s overall harmonic density so that the narrow-band peaks don’t stand out quite as much. In this respect it’s quite interesting to compare this Spike Stent mix with Craig Silvey‘s of ‘What The Water Gave Me’ from the same album. Although I like Silvey’s extra bit rock-and-roll ‘edge’ in general, for my money Stent handles the resonances of Florence’s vocal better, such that she seems closer and more solid to my ears most of the time, but without ever becoming as abrasive as during ‘What The Water Gave Me’ (for example at 2:10-2:22).