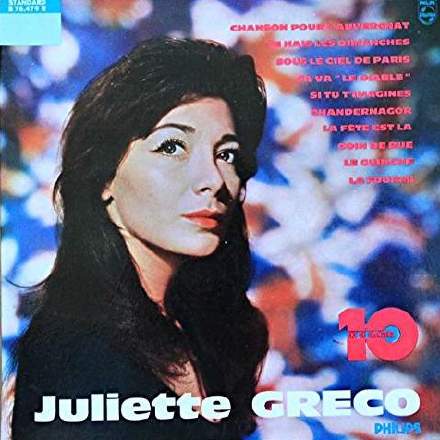 I confess that I had not been familiar with the work of this icon of the French Chanson tradition before her passing in September at the age of 93, and delving into her back catalogue since then has been a joy. This song is one of her signature numbers, the lyric cautioning a young girl to live life while she can, because her physical charms will soon fade. First recorded for Columbia under the orchestral direction of Pierre Arimi, it’s the version from the stereo release of her 1959 album 10 Ans De Chansons (sometimes labelled ‘Version 2’ on Spotify and iTunes) that’s the one to seek out, because it’s truly a thing of exceptional beauty. (Incidentally, as with a lot of older releases, digital download versions vary enormously in quality, and I’ve heard some horrible remasters of this tune with strange panning wobbles and weird modulation/reverb treatments added. I’d recommend trying to get hold of the version released by the Bibliotheque National De France Collection, which seemed to be the best of the bunch.)

The star turn, of course, is Gréco’s voice, a rich, deep alto captured wonderfully smoothly by the mic, but also presented uncompromisingly dry and upfront in the mix. It takes a singer of tremendous technical ability to shine under such intense sonic scrutiny, where every little detail is ruthlessly laid bare, so it is incredibly impressive to me how beautifully controlled and in tune she is, while also wearing this accuracy so lightly within her expansively expressive style. In other words, she spends most of her time sliding fluidly between note pitches and drifting across the boundary between song and speech, but whenever she does settle on a note for long enough to confirm its pitch, it’s always just where it should be. You can say a similar thing about her combination of crystalline diction and rhythmic nuance – she’s not afraid to show you where she’s putting every little syllable, and yet she effortlessly sashays around the metric framework in a way that at once serves the lyric delivery and the musical flow. And remember, we’re in 1959, so we’re not hearing some kind of in-depth vocal comping here. Even if they were using multitrack tape, the technology was probably incapable of dropping in on the vocal track independently, and I certainly can’t detect a single drop-in or editing artefact. With all that in mind, I wouldn’t hesitate to class this as one of the most astonishing vocal performances I’ve ever heard on record. Every time I listen I have to remind myself to stop gaping gormlessly!

But the riches don’t stop there. Alain Gorageur’s accompanying orchestra also delivers a truly inspirational arrangement, via an unusual line-up comprising harp, vibes/celeste, triangle, string bass, reed ensemble, and accordeon, with possibly a dusting of guitar in the background too. (Funnily enough, this spotlight on harp and tuned percussion reminded me a great deal of Karel Svoboda’s film soundtrack to the perennial European Christmas classic Drei Hasenüsse für Achenbrödel.) I particularly like the stark contrast developed between the vibes/harp/triangle texture and the reed choir, the latter becoming unmistakably funereal as Gréco begins listing the ravages of age from “Trés sournois s’approchent” at 1:25 ("…the swift wrinkle, the ponderous fat, the triple chin, the atrophied muscle"). And the accordeon’s one appearance for the high triplet figuration at “Soleils et planètes tournent tous en rond” (“Suns and planets orbit in circles”) is also divinely apposite, as well as strongly reminiscent these days of Yann Tiersen’s ubiquitous soundtrack to 2001’s international hit film Amélie.

Beyond the instrumentation, though, the use of harmony is fantastic too. There’s a lovely contrast, for instance, between the pedal-rooted stasis of the opening harmonies and the swift cycle-of-fifths harmonic rhythm that follows at 0:22-0:29, and I’m always a sucker for diminished-seventh chords such as at 0:57 and 2:13 as well! The song’s slower central section (1:02-1:42) moving to the tonic minor, with its churchy IV-I plagal cadences at 1:02-1:09, also feels throughly appropriate for the lyrical mood of those lines. But there’s one section in particular I wanted to single out for closer scrutiny, because it nicely illustrates one of the basic concepts of classical harmonic theory. You see, one of the principles of traditional chordal voice-leading is that if you create a dissonance by flattening a note, then that flattened note should tend to resolve downwards; and by the same token sharpened dissonances should tend to resolve upwards. So, for instance, if you take a G9 chord in C major and flatten the ninth to Ab, then you’d normally expect to resolve that note downwards to G in the following chord. By the same token, if you instead sharpened the G9’s fifth to D#, you’d typically resolve that note upwards to E in the next chord.

With this in mind, the chord first heard under “-nois” at 1:27 is an interesting case-study, because its consituent notes look a lot like they make up a standard seventh chord ( F-A-C-Eb) if you look at them in isolation. But when you examine how the voice-leading functions in context, it’s clear from the chord’s resolution (first under “triplé” at 1:37 and then more conclusively under “avachi” at 1:40) that the chromatic note isn’t actually an Eb falling to D, but a D# rising to E. So, functionally speaking, what we actually have here is an augmented-sixth chord comprising F-A-C-D#, not a seventh chord comprising F-A-C-Eb. Now, of course, the fact that both those chords clearly look the same on the keyboard has encouraged many a composer to flit capriciously between the two different functions for dramatic effect – for example by playing a G7 chord in C major, but then treating its F note as the E# of an augmented sixth and resolving it upwards to the root note of an F# chord. While almost certainly swirling their cape into the bargain…

If you’ll forgive me geeking out a little longer on the subject of augmented sixth chords, here’s another intriguing aspect of them. If you play a supertonic ninth chord in the key of A minor (ie. the notes B-D-F-A-C), but then chromatically alter the chord’s minor third to the major ( B-D#-F-A-C) you get a kind of secondary dominant chord which most obviously resolves to the dominant E chord – the D# note resolves upwards, while the tonal seventh and ninth both fall as normal. However, if you now omit the supertonic chord’s root note from that progression, you end up with exactly the augmented-sixth chord and resolution we see in this Gréco song. Personally, I think this vestige of secondary-dominant flavour within the augmented-sixth chord is a big reason why its usually resolves most naturally to the dominant chord.