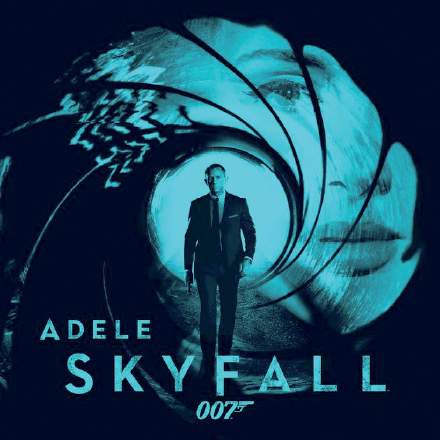 The CD single of this Oscar-winning track includes an instrumental mix, which can be phase cancelled against the full mix, almost isolating the vocals! Courtesy of this dodge, it’s apparent that the vocals have been chopped around a fair bit (check out the “zat skyfalls” at 1:54, for example) and that much of the second chorus appears to have been copied from the first.

The lead line obviously relies on heavy reverb and tempo-sync’ed delays, but the isolated vocals suggest that there are no short reverb or stereo widening effects, which helps to explain how the vocal manages to remain so up-front, despite its subjective wetness. Soloing the Sides signal shows how little the consonants feature in the effect returns, indicating some serious low-pass filtering or send de-essing. Focusing on the backing vocals is also enlightening: it’s an education to hear the rich lower voices of the choral arrangement leading into the final chorus, as well as the exact voicing (and robust high-pass filtering!) of the choir at 4:10.

There are so many aspects of the track that are worthy of attention, not least the drums and piano, but the highlight, for me, is the harmony, which perpetrates some of the squishiest dissonance-stacking ever to have graced the mainstream charts — and the chorus is the high point of this towering achievement. Although the orchestral bombast does the talking in the first bar, the sustained C and Eb pitches in the upper parts slowly ratchet up the harmonic tension during the root progression’s falling-thirds sequence, ending up as the seventh and minor ninth of a supertonic Ddim chord, only resolving to B and D in the G7 that closes bar four. That pattern repeats, but with a crucial difference: the F and D chords are both chromatically altered to major versions. This transforms bar eight’s supertonic chord into a semi-modulatory ‘dominant minor ninth of the dominant’, a powerfully contradictory harmonic concoction that pits the stability of the D major triad against the ambiguity of a complete F# diminished-seventh shape.

While all this is going on, a G pedal tone sounds pretty much continuously during the first six bars, a note only consonant to the progression’s Cm and G7 harmonies, so that the first supertonic chord gains an additional dissonance. But it’s Adele herself who plays the trump card later, by persevering with an unchanged repetition of her four-bar chorus melody over the altered harmonic progression in bar eight. This means that the F she sang in bar four (that chord’s minor third) clashes against the altered supertonic chord’s F# in bar eight. Yet this super-chewy discord still manages to make sense musically, partly because it forms part of a melody already internalised via the repetition, and partly because it’s actually handled ‘by the book’ as far as the classical-style functional harmony is concerned: Adele’s F is prepared as a consonance in the previous major chord, progresses downwards by half-step (as you’d expect) to the accented passing note of Eb on beat three, and then resolves to the consonant D on beat four.

The upshot of all this is that the harmonies of both bar four and bar eight feature some outrageously dissonant note clusters ( C-D-Eb-F-G-Ab and C-D-Eb-F-F# respectively). If they’d appeared in something by Debussy or Miles Davis I wouldn’t bat an eyelid, but the fact that they’ve been made to sound logical — even inevitable — within an essentially traditional harmonic landscape is extraordinary.

It’s not a description I use lightly, but in my opinion this production is a masterpiece.

The drums are an absolute winner too, if only for dropping the coolest intro fill I’ve heard all year when they arrive at 1:22! And what a great drum sound it is too, the weighty attack phases of both kick and snare well-suited to powering their way through the massed ranks of sustaining instruments, yet short and tight enough to let all that orchestral goodness ooze through the gaps. There are no crash cymbals in there to get in the way either, which means you hear much more of the HF details from the strings, brass, vocals, tambourine, and orchestral percussion.

The piano sound is thought-provoking too. My first impression is that I don’t like it very much – its hammer-heavy sound somehow seems like an inappropriate represention of the instrument in the light of the glorious vocal and orchestral sonics. With familiarity, though, I’m left in two minds, because it does carry a flavour of slightly crusty 70s sonics, and it could also be argued that it provides an essential foil to the vocal sound, without which Adele might not sound quite as ravishing. (Hard to imagine, I know.)

One final thing that’s good for a giggle if you phase-cancel the backing using the instrumental version: at 3:05 you suddenly hear a random snippet of choral ‘ooh’ that breaks through into the mix from somewhere in a way that can’t have been intentional. Glad to see even the top names get caught out by that kind of thing from time to time! Also, I wonder whether the brass have been muted just a fraction too early at 2:02? Feels like they should have extended to the barline to me.