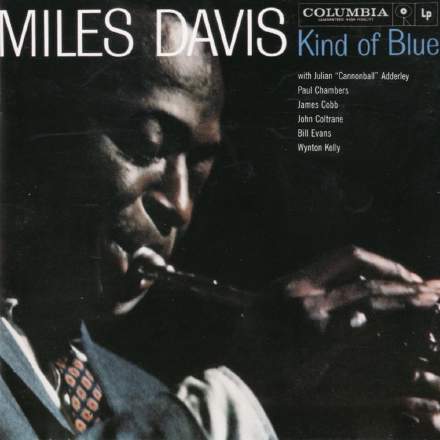 There are very few things you can say about this music that have not already been the subject of a PhD thesis, but it’s also quite interesting from the perspective of studio technique. The first thing to notice in the stereo mix is that the reverb is mono. This is great for Miles Davis, sitting as he is at the centre of the image, but a little disconcerting for John Coltrane’s and Cannonball Adderly’s solos coming from the left and right respectively. It also bugs me that Coltrane’s slightly rasping tone blends significantly less well than that of the other two soloists. It makes me want to reach over and angle the mic further away from the instrument’s bell.

An advantage of the mono reverb, though, is that you can listen to the mix’s stereo Sides signal to get an idea of the amount and character of room sound that was actually recorded (at least on the piano, drum and sax mics). And it’s pretty tight–sounding, to be honest — a hint of reverb tail, but none of the small–room character that most budget sessions have to contend with. This makes sense, of course, in light of surviving session pictures showing the musicians in a fairly close formation in Columbia’s capacious 30th Street Studio (a former church), the group partially walled in with tall gobos.

On a totally different subject, I couldn’t help being tickled by this rubric from the original LP sleeve: “Scientifically designed to play with the highest quality of reproduction on the phonograph of your choice, new or old. If you are the owner of a new stereophonic system, this record will play with even more brilliant true–to–life fidelity. In short, you can purchase this record with no fear of its becoming obsolete in the future.” Or, to put it another way: “My name is Ozymandias, king of kings…"