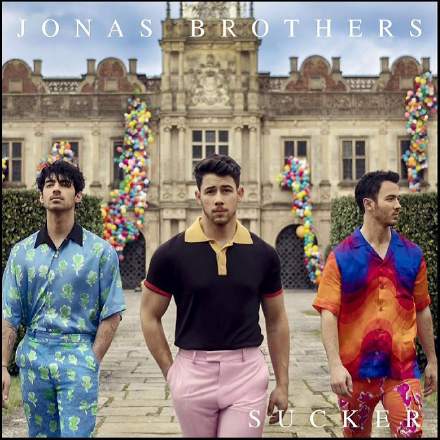 This track makes great use of 16th-note slap–back delays on the vocals, which add urgency to the brothers’ percussively rhythmic singing style. You can immediately hear it on Nick’s opening falsetto vocal, for instance, although the widening effect that’s also been applied to his voice actually obscures the most interesting aspect of the delay treatment, I think — namely that it’s a stereo delay. When Joe takes up the melody at 0:14 things get more interesting, as the interplay between the mono dry signal and the stereo slapback creates an appealingly hyperactive stereo effect that really works well. Incidentally, I noticed a definite commonality between this stereo effect and the one I pointed out in my critique of Kacey Musgraves’ 'Butterflies', so I wasn’t surprised to discover that both come courtesy of the ever-mysterious Serban Ghenea.

I also like how this song’s refrain whips through its little tonal cycle of fifths (C#m-F#m-B-E-A) before slowing the harmonic rhythm for its VI-V-i cadence. However, I can’t help feeling that this progression is weakened when the drums join in with the first chorus at 0:35-0:40, on account of that strong pitched resonance (and A note) within the kick sample. You could argue that the producers are deliberately trying to avoid the chorus seeming too stable at that point in the song, but given the clarity of the harmonic messages elsewhere I really don’t buy that, and I reckon they’d have done better to filter out the resonance there, or else raise its pitch to a C# (the home key’s root), which would have worked better as a pedal tone in that instance. Fortunately, once the proper bass line arrives at 0:42 it overpowers this kick resonance, banishing any further ambiguity.