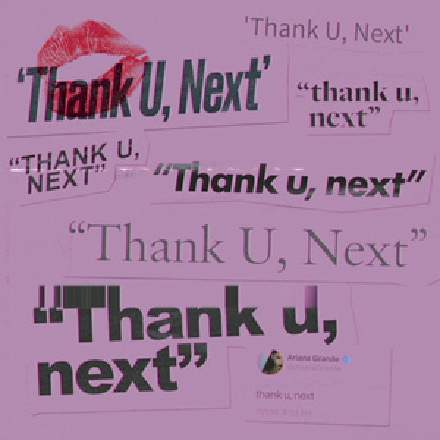 I took a pop at Ms Grande’s vocal enunciation last year when I critiqued 'No Tears Left To Cry', and she’s scarcely more intelligible here, but her melody is harmonically rather intriguing in that its repeated Ab-Gb-F riff reiterates the key’s flat seventh degree (Ab) over a series of dissonant bass notes (Gb-A-Bb). The ‘Ab versus A’ dissonance is particularly juicy. Although it seems quite modern, it actually has a very long history in the classical repertoire, and is perfectly justified in terms of traditional minor-key voice-leading, where falling lines use the flattened sixth and seventh degrees (the vocal’s Ab and Gb here) and rising lines use the sharpened ones (the bass’s leading-note A, which rises to Bb).

Personally, I’m more than happy to ignore the vocal entirely, and focus on the bass line and its lovely use of portamento. In its very first bar, the bass treats us to a dramatic octave sweep upwards towards the third beat, after which the pitch partly falls off again in a way that’s so natural for bass players to do, but which I know from bitter experience can be surprisingly tricky to simulate musically using synths. This pitch slide then becomes a recurring feature, and is even lengthened deliciously in its fourth iteration at 0:25. But that’s not all, because the chorus riff gives us a new portamento idea, this time a long ‘down to the depths’ fall-off at the end of every other bar. Many MIDI programmers seem to think almost exclusively in terms of note numbers, timings, and velocities when programming parts, so it’s instructive to realise how much just a bit of portamento can elevate a musical part.