The Death Of You And Me 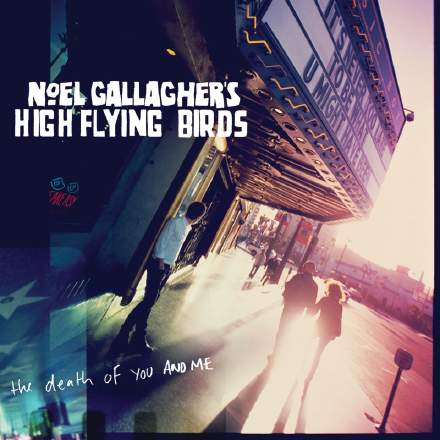 Even if I inhabited a twisted parallel universe where I actually wanted to hear the word “sunshine” sung by either of the Gallagher brothers ever again, I’d still have some reservations about the vocal on this record, specifically as regards the balancing of its occasional falsetto notes. The nub of the issue is that a falsetto delivery has a completely different timbre to a note that’s sung more normally, especially if the singer has to strain to hit the pitch in question, as is normally the case — the 2-4kHz register will tend to be emphasised by forced high-register singing, whereas a weakness in this spectral region is part of what tends to give falsetto its naturally softer-edged character. As a result, mixer settings that work for normal singing won’t necessarily do for the falsetto.

In this specific scenario, things are OK during the verses — Gallagher isn’t pushing his normal voice too hard, so the tonal disparity is less pronounced. It’s in the choruses that things really come to a head: he pushes his normal voice up to claim the high E-flat that was formerly sung falsetto, giving it a much harder edge by comparison with the even higher falsetto words “whole” and “storm”. Of course, it doesn’t help that the backing texture also becomes richer in the critical 2-4kHz area at this juncture, masking it more strongly and thereby pushing the falsetto words even further into the background. The “storm” at 2:29 is about the best of the lot, but even that one takes a noticeable step backwards relative to the notes either side of it. To my mind, the evenness and intelligibility of the line could have been improved a good deal with a stiff dose of 3kHz boost on those two falsetto words in each chorus — perhaps from an automated EQ. The move to falsetto isn’t the only ‘gear-change’ you can hear in this vocal performance, though, because there’s also a less pronounced one audible during “running from people who can” and “sucking up my soul”. Again, those lines submerge slightly beneath the backing, so similar automation tactics could probably have helped a little there too.

This falsetto issue has always been a big concern for bands in a Coldplay/Travis/Keane vein, because of the way they tend to make use of the switch to falsetto as an expressive tool. (Whether they do this naturally or in a calculated manner is open to debate…) As such, there are plenty of examples of mix engineers grappling with falsetto delivery on record. A couple of good ones are Coldplay’s debut hit ‘Yellow’ (mixed by Michael Brauer) and Keane’s ‘She Has No Time’ (mixed by Spike Stent), both of which manage the vocal balancing better than on ‘Death Of You And Me’ to my ears.

It’s also interesting to note that the falsetto balancing problem recurs on the album’s second single ‘AKA… What A Life’. However, if you do have a listen to that track, check out the great little ‘mute botton solo’ at 1:12. It’s so easy to program this kind of thing in at mixdown now, but that doesn’t make it any less effective at renewing the listener’s attention.