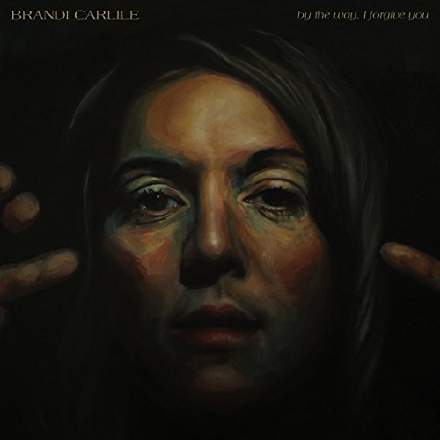 With this kind of combination of voice and song, Brandi Carlile more than deserved her recent Grammy hat trick. Reminiscent of Thom Yorke in her combination of emotional fragility and defiant high-register howl, she also boasts a richly expressive vibrato on words like “spin” (1:11), “girl” (1:46), and “on” (3:35) — a mannerism that very few artists can pull off without sounding self-consciously ‘stagey’. Moreover, it’s wonderful to hear a modern vocal performance on which I can detect no signs of pitch correction, and which is unquestionably more powerfully affecting as a result. As such it should probably be required listening for every music-tech course on the planet.

The harmonies reward scrutiny too, firstly because the main verse progression’s Am chord puts us in Mixolydian mode — a canny move for a bittersweet song, given that the minor dominant allows no easy perfect-cadence resolution (ie. V-I), so the more elegiac plagal cadence ( IV-I ) becomes the strongest game in town. Incidentally, if you’re looking for a quick route to more interesting harmonic progressions without resorting to fussy chords, modal techniques like this are a good bet in general. In this case, though, the chorus also expands on the minor dominant by adding a minor subdominant too, extending the verse’s I-v-IV-I to I-v-IV-iv, such that the (now intensified) plagal cadence resolves across the boundary between four-bar sections, rather than within the four-bar unit, thereby increasing the musical momentum to my ears.

But as the progression starts going round for the second time, the Am is suddenly substituted with an exhilaratingly chromatic F# chord, hinting at modulation to the relative minor. The moment of euphoria is short-lived, however, as it’s thwarted by a kind of interrupted cadence to G in the following bar, returning us to the IV-iv-I cadence formula. What’s particularly cool about that F# chord, is that its third ( A# ) is enharmonically the same note as the Gm chord’s third ( Bb ) two bars later, but where the former’s voice-leading (as a chromatically raised note) pulls it up to B, the latter’s voice-leading (as a chromatically lowered note) impels it downwards to A. Maybe it’s just me, but I think there’s something about that multivalency that suits Carlile’s lyric perfectly.