The Windmills Of Your Mind 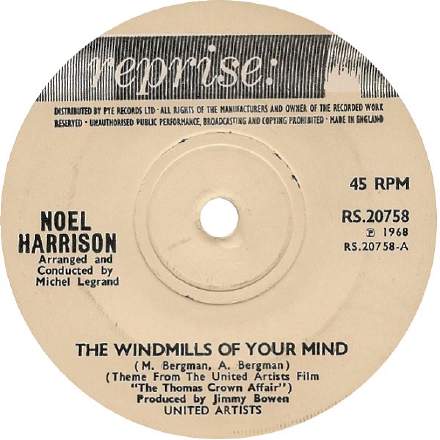 The recent sad passing of Michel Legrand drew me back to this Oscar-winning song (from his film score to The Thomas Crown Affair), which reminds me of something he once said in an interview: “I play with [music]. It’s a game.” The game in question appears to be whether he can out-do ‘Autumn Leaves’ for capitalising on falling cycles of fifths — a contest in which he triumphs convincingly, in my view!

One of the things that defines any song with a cycle of fifths is where and how it strays beyond the home key. Both songs initially work their way through all seven root notes tonally, though, within the prevailing minor tonality, giving (in Legrand’s case) an Ebm chord sequence of Ebm-Abm-Db-Gb-Cb-Fdim-Bb. But where ‘Autumn Leaves’ just resolves straight back to the tonic, ‘Windmills’ breaks the tonal cycle with a glorious diminished seventh chord on A (0:36), thereby intensifying the eventual Bb-Ebm resolution. But where ‘Windmills’ really sets itself apart is from “keys that jingle in your pocket” at 1:11, where Legrand begins working his way through another two complete cycles of falling fifths, but this time modulating as he goes, passing through Gb major (the relative major), Cb major (its subdominant), Bb minor (the dominant), Ab minor (the subdominant), and Gb major again, before finally allowing the Fdim chord at 1:39 to return us home to Eb minor.

One problem with using a long harmonic sequence as the basis for a song is that it encourages you to follow an overly repetitive melodic contour. Indeed, at first glance, ‘Windmills’ might appear to justify that criticism, but on closer scrutiny there are some nice features that mitigate it. The first is the way the ‘pace’ of the melody seems to double as the melody under the last four words of “and the world is like an apple whirling silently in space” is repeated for “like the circles that you find” and “in the windmills of your mind”. And once the modulations get going, the melodic contour becomes much freer, culminating in “that the autumn leaves were turning to the colour of her hair”, where those characteristic melodic leaps are finally abandoned to considerable emotional effect. (I can’t help wondering whether that lyric’s a sly wink to Joseph Kosma, too…)

I can’t say I’ve ever warmed to Harrison’s vocal performance, though, which feels slightly rushed and lacks real emotional attachment. Of course, given the success of the song, it can be difficult to imagine it any other way. (And the less said about Sting’s easy-listening version for the film’s 1999 remake the better.) But if you really want to hear this song performed with panache, check out Michel Legrand’s own French-language version from 1969, ‘Les Moulins De Mon Coeur’, and marvel that such a talented pianist, composer, arranger, and conductor was also a tremendous singer.