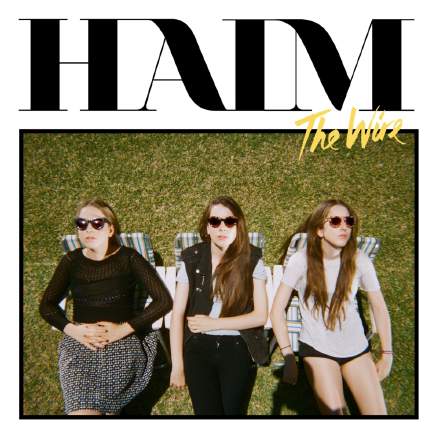 I was recently asked what kind of processing might have been involved in achieving the vocal sounds on Haim’s debut album Days Are Gone, so let’s take a look at ‘The Wire’, the record’s biggest hit so far. I don’t actually know anything concrete about how this track was mixed, so I won’t try to speculate. Instead, I’ll explain how I might try to create similar effects if someone asked me to emulate this vocal sound.

The first thing that struck me when listening to this is that there appears to be some sort of very tight zero-feedback ‘slapback’ delay effect going on, giving that subtle impression of there being a reflective wall behind the singer. This kind of effect is always a popular choice when you want to give any vocal a slightly alternative ‘recorded in a garage’ vibe, and in this instance I’d probably go for a delay time of around 50-60ms myself. The delay return would probably require some processing to avoid the audible flamming of short, sharp consonants, though, and while this might amount to nothing more complicated than a simple HF cut, I might favour de-essing and/or limiting instead, in order to retain as much of the timbral airiness in the effect as possible. Beyond that slapback patch, I’d be very wary of adding any other delay or reverb, because it’d quickly stop the voice sounding as up-front as it does here.

There’s also a widening effect in action, perhaps something akin to the classic stereo pitch-shifted delay patch I’ve often described in Mix Rescue (for example in July 2012), but it could also be some kind of stereo modulation process such as chorusing/flanging. Initially I thought it might just have been fed directly from the dry vocal track, but listening to the Sides component of the stereo mix, the widening effect feels like it’s lagging behind the beat slightly, so I reckon that the widener’s actually taking its signal from the slapback delay return instead. This is a canny move where pop vocals are concerned, because it means that any mono incompatibility incurred by the stereo-widener patch will afflict only the level/tone of the delay, not that of the core vocal signal.

Turning to the vocal timbre itself, there’s a slight enhanced ‘furriness’ and frequency density that implies to me that additional harmonics have been added to the raw recording to flatter it in one way or another. There are lots of ways this can be achieved, but knowing the identity of the engineer responsible for this mix (Mark ‘Spike’ Stent), I suspect that we may be hearing the sound of several desirable classic compressors working in parallel, and probably working fairly hard as well, to squeeze more tonal character out of them. For my money, I’d include some kind of Urei 1176 clone in the line-up if I were trying to emulate this in a DAW (there are plenty to choose from these days), but this kind of thing is very much a case of ‘suck it and see’. The sibilance is very well controlled, despite what sounds like fairly hefty compression gain-riding, so you’ll likely have a ton of de-essing to do unless you happen to have recorded your singer very carefully with a favourably voiced mic. And bear in mind that you don’t get this grade of balance, consistency and lyric intelligibility without a good few hours’ level-automation work…

From the perspective of EQ, the glib advice would be that you shouldn’t need very much as long as you get hold of a classy mic which suits the singer. However, dealing with the practical realities of most project-studio vocals I hear, I’d say that you’ll probably want to add a good dose of HF boost in the top octave of the spectrum (+3dB with a gentle shelf at 15kHz will usually a safe bet), and you’ll also want to experiment carefully with low-frequency contouring to try to get a consistent low mid-range response despite any proximity-effect bass boost the mic may have imposed during recording — as a benchmark, notice how smooth the 100-300Hz zone is during the vocal breaks at 0:20 and 0:38. If you want to retain a comparatively full-bodied sound like Haim have here, it’s critical that the levels in this spectral zone are well managed, otherwise you’ll quickly run into problems with overall muddiness. In this respect, notice how the electric guitars and keyboards in ‘The Wire’ use this region of the frequency range fairly conservatively, so be ready to apply EQ cuts in this region on the backing parts of your own mixes if you’re trying to make room for a similar vocal sound.