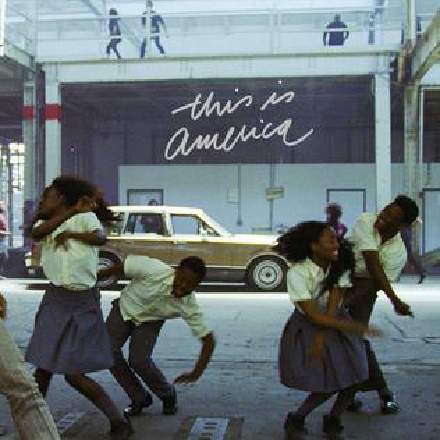 Almost all the music releases I critique here have an accompanying video. In the case of ‘This Is America’, however, it’d be fairer to say that the video has an accompanying music release — seriously, if you’ve somehow managed only to encounter the audio so far, then get yourself onto Youtube and check out the extraordinarily powerful piece of film-making that all the fuss is about. But I wouldn’t want to imply that the music lacks merit, by any means. I particularly like how, once the production’s main groove kicks in, the bass line provides such an uncertain and unsettling musical foundation by virtue of its wide, slow triangle-wave pitch-modulation — it sounds to me like it’s modulating across a ±1 semitone range at a frequency of about 1.3Hz, although the modulation waveform also seems to retrigger sporadically too.

The many and varied vocal ad libs during the main groove section are tremendous, providing as they do the primary source of variation for that texture through the production’s timeline. The sampled chorus vocals at 1:20-1:35 and 2:24-2:40 also really help with the sense of build-up towards the ends of those sections, and create an almost subliminal connection between this darker mood and the eerily upbeat atmosphere of the gospel choir first heard at 1:36.

All in all, this is a deeply thought-provoking piece of work.