Turn Down For What 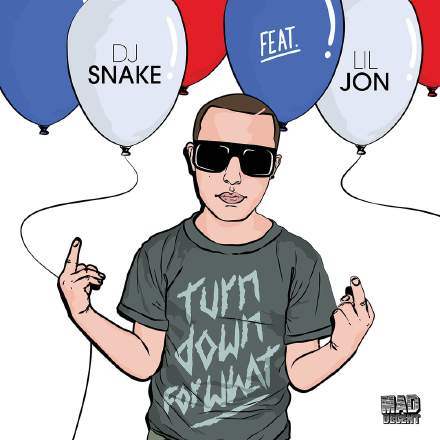 This is a tremendously clipped mastering job, with flat-top sections on each kick hit that exceed 150 samples in duration, followed roughly 200ms later by per-cycle overloads on the bass waveform, as the kick-triggered compression releases. Despite the opprobrium meted out to such loudness-maximisation tactics in more acoustic styles, I have nothing against them here, because the digital distortion artifacts don’t sound at all out of place in such an aggressive electronic style, and all the track’s other musical elements are generally balanced well below the clipping threshold, so they come through cleanly enough. Assuming that the desired loudness was non-negotiable, I think you’d have done more damage to this music by using a peak limiter than with clipping. In particular, you’d have softened the kick’s timbre, as well as pulling it down subjectively in the balance.

As far as the programming is concerned, I’m impressed by how much value DJ Snake manages to get out of the single “urr” vocal sample if it is, as I suspect, used as the basis for the entire initial lead-riff section (0:19-0:57). For a start, by adopting the classic playback-speed method of pitch-mapping, he immediately introduces a nice contrast between the heavily ‘chipmunked’ timbre with truncated note durations at 0:19, and the more languid, human-sounding legato when the pitches move down the octave at 0:29. I’ll admit to a certain feeling of nostalgia for this kind of pitch-shifting, which seems to have fallen a bit out of favour now that most music-making software seems to default to formant-corrected processing, because I think it still offers a good deal of expressive potential for the creative programmer.

I also like the way DJ Snake has set up a fast portamento (ie. those little pitch-slides at the starts of notes) to add more character and individuality to each of the note onsets — something that feels particularly effective here, almost like a natural extension of the inherent pitch waverings within the sample itself. Specifically, I’m pretty sure what we’re hearing here is a retriggered monophonic sample program (ie. each new MIDI note always retriggers the sample afresh, and the sample is never allowed to overlay on itself) with portamento set to occur only between MIDI notes that are overlapped. To illustrate the programming possibilities this affords, put the first iteration of that seven-note riff (0:19-0:21) under the microscope — if you slow down the playback rate of the whole track it’ll help you hear it more clearly. The second, fourth, and fifth notes of the riff have no portamento at all, but the third, sixth and seventh notes all slide in different ways (four semitones downwards, one semitone upwards, and eight semitones downwards respectively), by virtue of the previous MIDI notes they’re overlapping with. In addition, there’s also the pronounced downwards pitch-slide at the beginning of the first note, presumably generated by putting in a higher-pitched ghost MIDI note a fraction of a second prior to it, but with such a low velocity value that it’s effectively inaudible in its own right.

What’s great about achieving pitch modulation with portamento is that you can then layer MIDI Pitch-bend data on top if you like, as seems to have been done here with the fall-off at the end of the second main riff section at 1:54. Don’t forget, too, that many synths will let you automate (or modulate over MIDI) their portamento time parameter, which gives you additional pitch-envelope nuances to play with.