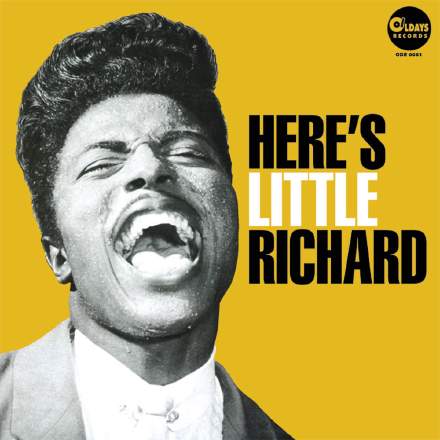 Back in 2012, Rolling Stone magazine described “a-wop-bop-alu-bop, a-wop-bam-boom” as the most inspired rock lyric ever recorded, an accolade that’s been much repeated in the wake of the rock-and-roll pioneer’s recent sad passing. There’s one small fly in the ointment, though: he never actually sings that! The closest he gets is probably the final line, but even there he gives us “-alu-mop, a-lop-” rather than “-alu-bop, a-wop-”. Everywhere else in the song (another five statements in total), the ending diverges too, from “bam-boom” to more like “-bom-bom”.

Now, my first thought was that maybe the original lyric had been distorted in our collective consciousness by later cover versions – you know, a bit like the way “Play it again, Sam” or “Elementary, my dear Watson” have widely proliferated as catchphrases despite their absence from, respectively, Casablanca and the Sherlock Holmes stories. Certainly Elvis Presley’s 1956 cover uses the “-bam-boom” suffix throughout, and you might argue that this accounts for the ascendancy of that variant. On the other hand, wouldn’t the “-bam-boom” version naturally stick better in the memory even if you’d never heard Presley’s cover, simply by virtue of its placement at the very end of Little Richard’s production? After all, finishing any song a capella is a hook-enhancement technique that’s still being used to death to this day – hell, I can think of five recent examples from Taylor Swift alone! (OK, if I must… ‘Me!', ‘Lover’, ‘I Knew You Were Trouble’, 'Look What You Made Me Do', and 'We Are Never Ever Getting Back Together'. Told you.) I reckon Elvis probably just fell for the same cognitive bias the rest of us tend to, allowing his selective memory to replace Little Richard’s less memorable variations with simple repetitions of that more attention-grabbing final line. (Incidentally, I talked about something very similar as regards melody when reviewing Avicii’s 'SOS'.)

But what about “-alu-bop, a-wop-”? You can’t really blame that on Elvis, because he delivers it pretty much as Little Richard does, although admittedly drifting towards “-alu-wop, a-lop-”. And Pat Boone’s rather sanitised 1955 cover (which actually charted higher than Richard’s at the time, so there’s clearly no accounting for taste…) also keeps the “-alu-mop, a-lop-” intact, albeit while changing “-bom-bom” to the slightly twee “-bop-bop”. Again, in my opinion the widespread misremembering of this lyric these days has as much to do with how our memories work as it has to do with the song’s performance history. It’s just easier for us humans to remember a two-phrase scat line like this when we give both phrases the same “a-wop-” header. Think of it as a kind of lossy data compression: rather than storing the reality of two different (but similarly rhyming) headers “a-wop-” and “a-lop-”, it seems that a lot of people’s brains (mine included!) effectively chose to save storage space by swapping out “a-lop-” for a fictitious “a-wop-” repetition.

Another fascinating aspect of this production is that it was all recorded in one go, with Little Richard playing the piano while singing. Now, he’s clearly a man with a powerful set of lungs, but recording any singing instrumentalist can be challenging at the best of times, so it’s pretty impressive how much the voice dominates over the piano in the mix. If I had to guess, I’d say he was probably recorded on a figure-eight vocal mic with its polar pattern’s powerful side-null pointing towards the piano – a bit like in this picture featuring the classic RCA 44 ribbon (although there’s no evidence that this pic derives from that specific session):

With this kind of setup, any adjustments to the vocal/piano balance could have been implemented by tweaking the exact angle of that mic. By the same token, the balance of all the other instruments within the small 15x16-foot studio live room at Cosimo Matassa’s J&M Recording Studio could also have been adjusted by positioning them in relation to the vocal mic’s rejection nulls – even if there were other close mics in action, those wouldn’t have been any use in preventing the vocal becoming buried in the mix.

Within this context, it’s worth checking out the current ‘deluxe’ edition of Little Richard’s album Here’s Little Richard, on which this single appears, because there’s an unused take amongst the bonus material (the second of the three they did back in the day) which, unlike the release version, hasn’t had extra chamber reverb added. As such, it gives you a much clearer insight into the acoustic character of the actual recording room, which sounds pretty well damped. And it stands to reason they’d have wanted it that way, given that lots of sonic reflections would have reduced the balancing power of the mic polar patterns and instrument positioning, potentially making the recording job much harder.

Now, it was once common practice for band soloists on sessions like this to simply sidle up closer to the lead vocal mic (or just more on-axis to it) to boost their mix level during solo sections. (Check out The Ink Spots’ 'If I Didn't Care' for a fun example of this.) So when I heard the sax solo rise up in the balance for its solo at 1:20 here, I initially assumed he’d leveraged his shoe leather in time-honoured fashion. However, you can also hear that the ride cymbal suddenly becomes brighter and more prominent in the mix at that point, and that the snare feels richer and more natural-sounding too. So maybe we’re actually hearing the engineer’s hand riding the sax mic’s fader here, inevitably increasing the audibility of the sax mic’s drum spill at the same time. Far from being a problem, though, I think this added spill actually makes the solo section the best-sounding part of the record, so I kind of wish they’d left the sax mic at that level the whole time, and just asked the sax player to step back from it a bit when he wasn’t soloing.

From a harmonic perspective, there’s something that’s always bothered me: the chorus always seems to return on the wrong chord whenever it follows the verse, for example after “she’s the one that I love best” at 0:33. The chord I always hope for there is the subdominant Bb, but instead you get the tonic F, and it just feels weak. Instinctively, I was inclined to lay the blame on the fact that there was also tonic harmony in the previous bar, removing harmonic momentum across the barline. But the solo section also ends on F, and the chorus following that feels just fine. I have no decent explanation for why that might be – it’s infuriating! But I can at least console myself that I’m not alone. Pat Boone’s version, for instance, uses the subdominant exactly where I’d hope, as does Queen’s cover on their Live At Wembley Stadium album. Little Richard himself tackled the same issue in a slightly different way on his 1967 Greatest Hits Recorded Live! album, moving to the subdominant for the last two bars of the verse so as to introduce a harmonic resolution into the chorus – a trick the American rock band MC5 also used for the cover on their 1970 debut studio album Back In The USA.