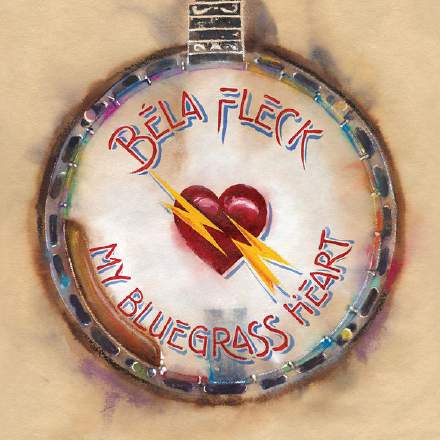 You’re guaranteed one hell of a ride with pretty much any Bela Fleck record – but, holy cow, his latest Grammy-winning album My Bluegrass Heart really is a head-spinning concoction of virtuosity and musicality! The opening track ‘Vertigo’ launches you straight in at the deep end too, presenting a structure full of brain-tangling rhythmic and harmonic twists, within which Sam Bush, Stuart Duncan, Edgar Meyer, Bryan Sutton, and Fleck himself solo with astonishing freedom and fluidity, as if it’s the easiest thing in the world. Just in terms of the performance, it’s genuinely jaw-dropping.

So what’s so odd about the underlying structure? Well, the main thing is the rhythm, which plays fast and loose with any concepts of regular pulse that you might expect from traditional bluegrass. Right from the outset we’re left guessing where to tap our feet, as the opening sixteenth-note riff outlines a repeating time-signature pattern comprising two bars of 5/8 followed by one bar of 3/4. But just as you’re beginning to get the hang of it, the third iteration is followed by two 4/4 bars. I say 4/4, though, in the broadest possible sense, because although the four-sixteenth banjo and fiddle figurations clearly suggest a regular quarter-note pulse here (stressing sixteenth notes 1, 5, 9, 13, 17, 21, 25, and 29) the bass, guitar, and mandolin all play a series of dotted eighths from the beginning of beat two, creating an extended hemiola (stressing sixteenth notes 1, 3, 6, 9, 12, 15, 18, 21, 24, 27, and 30) that undermines any sense of common metre until everyone finally converges on the downbeat of the first solo section at 0:17.

At that point, it briefly seems as though we might be in familiar 4/4 territory, but already in the fourth bar of the pattern the bass and guitar stress the fourth eighth note to create another hemiola (although of the dotted-eighth variety this time), and in bar seven we get another much longer hemiola (five dotted eighths in a row) skipping right off the second eighth note. Fortunately, this eight-bar pattern repeats once to let us listeners get a bit of a handle on it, but then it’s straight back into the introduction’s 5/8-5/8-3/4 time-signature pattern. And although this transition will definitely catch you on the wrong foot the first few times you hear it, there’s nonetheless a certain logic to it with hindsight, because of the way the 5/8 bars' 2+3 stress patterns echo the preceding hemiolas' contrasting quarter and dotted-quarter groupings.

The harmonies are cool too, alternating between two sets of chords with baked-in false-relations: the introduction’s Bb-Db-Eb progression (setting D against Db) and the 4/4 section’s Em, A, and C7 chords (setting B against Bb and C against C#). And anyone fancy hazarding a guess what the chords are in the hemiola-saturated 4/4 bars at 0:14 and 0:53? Me neither. Although, to be honest, I’m not sure it matters much, because it’s not like those sections really smooth the modulation between Bb major and E minor – except by the time-honoured means of establishing such a sense of harmonic uncertainty that any destination seems as likely as any other! That said, later on in the tune, this same structural section is presented with a much more straightforward Bb-G chord progression which does link us pretty smoothly back to Em, given that the false relation ( Bb to B) is nothing out of the ordinary in this particular number.

And if you like what you hear here, I’d thoroughly recommend checking out this fabulous live version of the tune featuring both Michael Cleveland and Sierra Hull. (For more about them, check out my critiques of 'Tall Fiddler' and '25 Trips'.)