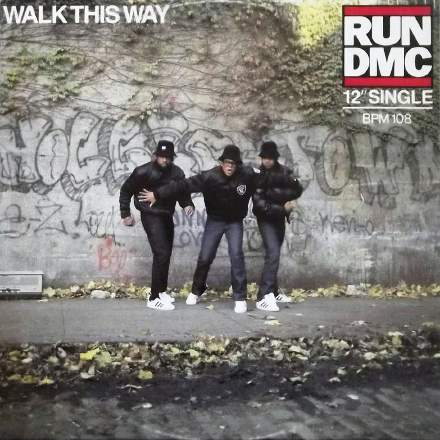 A pioneering collaboration between Run-DMC and Aerosmith under the auspices of production guru Rick Rubin, this not only catapulted the rap-rock sub-genre into the mainstream, but also helped launch the career of one of the all-time great mix engineers, Andy Wallace. Despite the heavy gated (or sample-triggered?) snare ambience, what impresses me is how aggressive and upfront this production sounds. That might seem nothing special these days, when we’re so used to super-dry and present mixes, but in 1986 Rocky IV, Karate Kid II and Top Gun had saturated the airwaves with lushly reverb-tastic offerings like Survivor’s ‘Burning Heart’, Peter Cetera’s ‘Glory Of Love’, and Berlin’s ‘Take My Breath Away’. In that context, ‘Walk This Way’ must have felt like a bolt from the blue!

It’s also easy to underestimate the production’s complexity. Yes, there are plenty of big, bold elements in there: the merciless sampled drums, the guitar riffs and the alternation between Run-DMC’s rapped verses and Steven Tyler’s sung choruses. But the closer you listen, the more nuances emerge. For instance, this production might appear to have no bass part (and the strong ‘C’ pitch to the kick sample potentially obviates the need much of the time), but there’s something sneakily sidling in at 0:26 to underpin the first verse. It can also be detected in the choruses, where its rhythm deviates from that of the guitar. (If you can’t hear what I’m talking about, low-pass filter the mix at 100Hz and it’ll become more clearly audible.)

The way the verse is developed throughout the production is cool. The second verse, for instance, adds live ride-cymbal overdubs, a lead-guitar fill at 1:02, and Tyler’s pitched call-and-response contributions on phrases such as “kitty in the middle” (1:00) and “ready to play” (1:06). Then, after the third verse has stripped things back to a loop from Aerosmith’s original 1975 release (a nice touch!), Tyler joins the rapper in an equal lead role all through verse four. In fact, despite strong competition from the samples, riffs and raps, Tyler totally steals the show with his hook line. Not only is it extraordinarily high (high Bb and the Eb above it), but the tone is so gloriously filthy and distorted that it merges seamlessly with the guitar timbre to create something more than the sum of its parts. So striking is this timbre, in fact, that I don’t feel in the least short-changed despite there being, unusually, only two such hook sections in the entire song.