We Owned The Night 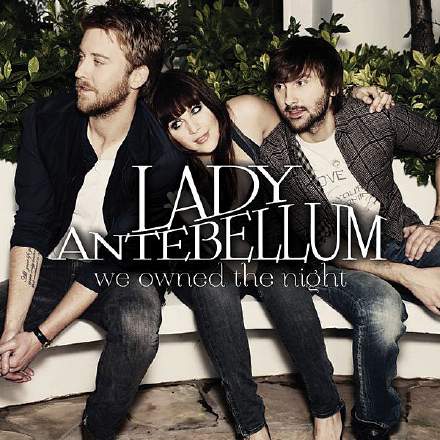 Although this band’s country pop sound has scarcely tickled the UK singles listings, their last two records have both topped album charts in the US and Canada, with their latest offering making the UK top five. For me, the star attraction of this second single, from a production perspective, is the vocal editing, which is an exercise in firm but musical control. The pitching and timing are clearly superhuman, especially when you consider the vice-like hold that Charles Kelley’s voice exerts over his bandmates' backing harmonies, but whatever behind-the-scenes work this may have involved is worn so lightly that suspension of disbelief is almost effortless, and you can pretty much just get on with enjoying the song. In particular, there’s a fine line between fixing subjective sourness in the tuning department, and removing the very pitch variations that make a performance live and breathe. This record treads that line with assurance. Take the second verse, for instance, where the addition of backing harmonies would tend to highlight even slight tuning discrepancies, but the ends of all the lead vocal lines (“beauty”, “kind”, “about her”, and “stand still”) nonetheless benefit tremendously from the kind of expressive pitch-domain vagueness that lesser productions frequently iron out through over-zealous application of Auto-Tune.

Scarcely less impressive, from a mixing perspective, is the effectiveness of the long, slow build-up from the very beginning of the song until the end of the middle section just after the two-minute mark — an unusual feat for any chart single, especially given the way that loudness wars have undermined the effectiveness of sheer volume as a mix tool. One of the standard tricks, of course, is to start the arrangement as small as you can get away with, in this case using just kick and multitracked acoustic guitars, joined at 0:20 by the solo verse vocal. But from then on, the challenge is maintaining a drip-feed of new textural additions without running out of ammunition too early. So the second verse (0:39) gives you snare, toms, supporting electric guitars, and first one, then two backing harmonies, as well as just the lightest dusting of bass and Hammond. With the third verse, the main bass sound arrives, along with some ride wash, backing ‘ooh’s (as well as generally more prominence in the balance for the backing harmonies) and various steel-guitar swoops, following which the Hammond and guitar solo kick the song up another gear towards the middle section at 1:45. This might not seem like rocket science, listening to the final product, but it takes a great deal of nerve to maintain this degree of restraint during work in progress. Ask yourself, for example, whether you could have resisted the urge, as producer, to add more electric-guitar power-chords or flashy Hammond swirls under “and for a moment” at 0:49 or for the first chorus at 0:59?

The layered acoustic guitars also appear to be supporting the build-up on a sonic level, in that the texture thickens and homogenises progressively, as you can hear by comparing the stereo Sides components of the second and third verses, say. In the light of this Sound On Sound magazine interview with Lady Antebellum’s producer, Paul Worley, it wouldn’t surprise me if this were a combination of the ‘herd of guitars’ he mentioned and a generous helping of fader automation — certainly, there appears to be something of this kind going on at 0:38, filling out the final two beats before verse two.

Comparing the right and left channels of this mix highlights another interesting aspect of the acoustic guitar textures, namely that the opposition-panned spread isn’t tonally balanced in the way you hear on some records — the left side sounds distinctly different from the right. Although this is something that some recording musicians reject out of hand for fear of unbalancing the stereo picture, the advantages of a slight tonal disparity between panned double-tracks are that the image will tend to feel wider for a given pan-position offset, and that the picture will combine a little more solidly into mono, giving slightly less of a chorus-like timbre. So if you always do stereo double-tracks on your own productions with the same instrument/mic setup for both sides of the panorama, listening to this track might provide an impetus to move outside your comfort zone.