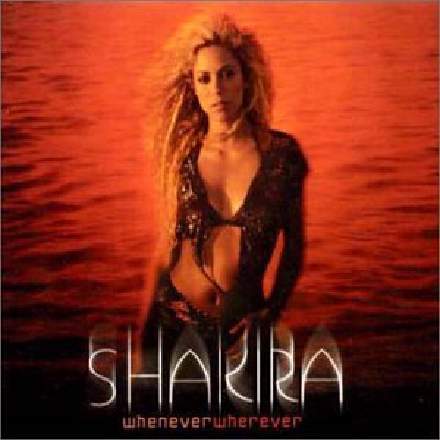 It’s been ages since I last heard this song, and while the sheer amusement value of such doggerel couplets as “I would climb the Andes solely / To count the freckles on your body” and “Lucky that my breasts are small and humble / So you don’t confuse them with mountains” will surely never pall, the bafflingly pervy music video (a 2002 Latin Grammy winner, no less) trespasses into genuinely creepy territory as far as I’m concerned. Some things, sadly, you can’t unsee… Putting that aside, though, Shakira’s vocal style is scarcely less remarkable today than it was 16 years ago, so unorthodox and instantly recognisable as to be almost an instant caricature of itself. Most female vocalists want to create a unique sonic brand, but I reckon you’d only need the fingers of one hand to count those who’ve slam-dunked it as convincingly as this during the past decade.

If you can tear your ears away from Shakira chewing up the scenery, though, the main beat is also interesting. These days, I get the impression that pop producers who build their songs around a four-to-the-floor kick drum often don’t want to compromise its power by carving out much space for a backbeat, but here the snare’s given a generous helping of meaty lower mid-range. Yes, this does draw some rhythmic firepower away from the verses, but on the flipside also generates an undeniable arrangement ‘lift’ when the chorus texture arrives. The understated electric guitars are also easy to overlook behind all those twinkly percussion and charango layers, but I think they’re crucial to the texture’s mid-range harmonic density and stereo width, and also seem to lend a certain ‘glue’ to the production as a whole. (If you’re thinking ‘what electric guitars?’ try listening only to the stereo Sides signal, which unveils their surprisingly in-depth arrangement.)

This single was released with Spanish lyrics in Latin America, under the title ‘Suerte’, and this is also included on the same album, Laundry Service. In a curious inversion of the mañana stereotype, however, it appears to have been sped up too (it’s about 20 cents sharper), as well as being mastered a half-decibel quieter and with a touch less bass. Whatever the reason for such subtle changes, I struggle to conceive why they bothered with them at all. Was there really some radio station in Spain or Mexico who wouldn’t have played it with a decibel more 100Hz?