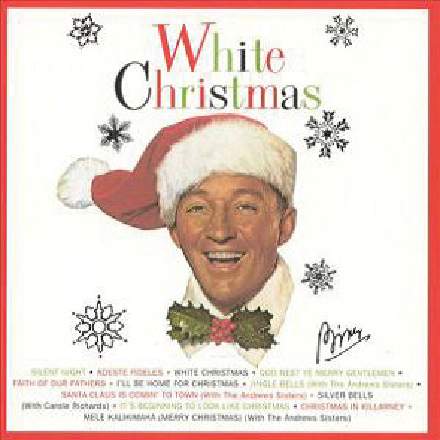 What better time of year to discuss the best-selling single of all time? The Guinness Book Of World Records claims that this record has shifted in excess of 50 million copies since its initial release in 1942, although the version you’ll hear nowadays is actually a painstaking re-recording Bing did in 1947, after the original master wore out! (Decca released an ill-advised ‘enhanced for stereo’ version of the recording in 1963, slathered in added hall reverb, so try to track down the original mono master if you want to hear the sonic details a little better.)

The arrangement is first-class, and wisely resists the temptation to translate “sleighbells in the snow” too literally, instead relying on interplay between the gentler sounds of celeste, harp and trilled/tremolando violins to get those treetops glistening. (I suspect that the violins are deliberately playing closer to the bridge for their tremolo around 0:45, to give it that characteristically glassy tone.) I particularly like the way the sighing countermelody first introduced by the violins over Bing’s “treetops” at 0:32 is not only revisited for “may your days be merry” at 1:13 and 2:35, but is also woven in several times in inversion, for example at 0:52, 1:30 and 2:10. Although this thematic repetition may seem trivial at first glance, I think it actually has a powerfully cohesive effect on the music as a whole, and it’s very much a hallmark of the great arrangers of that period.

Turning our attention to the voices, listen to how Bing’s level and tone develop through the song. Engineers of the 1940s were no less concerned with achieving consistent vocal transmission than we are today, but in the absence of multitrack recorders they were forced to make any necessary balance adjustments while recording direct to mono. Although riding the vocal fader ‘live’ is something of a lost art in the studio these days, engineers of the time became extremely adept at it, using their knowledge of the song’s melody (and the singer’s body language!) to anticipate and compensate for overly loud or quiet notes. Canny recording artists such as Crosby would also modulate their distance from the microphone in real time for similar reasons, as well as to control the degree of low-end warmth added by the vocal microphone’s proximity-effect bass boost. Although technical specifics relating to this session seem pretty thin on the ground, from what I can hear I think the engineer’s hands and Crosby’s feet are both at work at 1:11, where the relaxed “may your days be merry” is considerably warmer and louder than the following strongly projected “bright”. And then I’m guessing that the softer “and may all your Christ-” was faded up mostly by the engineer, because the proximity effect of Crosby stepping up to the mic only really kicks in at “-masses be white”. (While we’re on the subject, do you reckon the engineer was caught napping on the first “I’m dreaming” at 0:10? It’s just that the vocal does seem very buried in the balance there, and then suddenly leaps up in level from “of a white…” onwards.)

The choral arrangement is notable for its use of humming, which allows the choir to slip into the background behind Bing’s “just like the ones I used to know” (0:20) and “with every Christmas card I write” (1:02), even though they seem to have been set up in a close studio position to suit their lead role at 1:34-2:45. The men’s return to humming at 2:15 makes sense too, because it really helps the womens' lead line to come through clearly despite its comparatively low register.