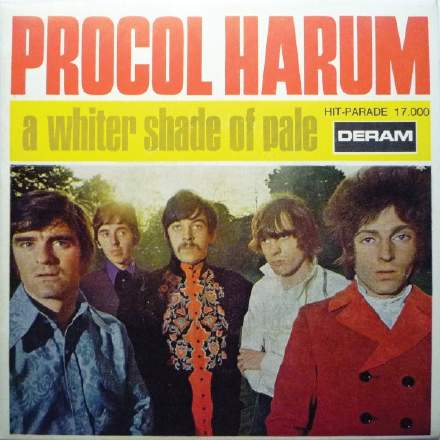 We producer types love to inflate the importance of what we do, so it’s sobering to recognise how little this monster hit owes to its production, even at a time when Sgt. Pepper’s was conquering album charts across the globe. For a start, all the instruments play all the time, with scarcely any textural variation, so there’s no real arrangement work to speak of. The engineering isn’t exactly flattering either. The piano and guitar parts (What piano and guitar parts?!) are practically inaudible. The vocal line has some plosive pops (check out “plain” at 2:18) and is also incongruously bone-dry for such a soaring line. And the cymbals are loud enough that, back in the day, producer Denny Cordell apparently sent a pre-release copy to Radio London querying its suitability for broadcast.

Basically, this is a record that’s 100 percent about lyrics and musicianship. Unfortunately, I think all the talk about psychedelic wordplay and Baroque stylistic pastiche has overshadowed other aspects of the music that are just as important. For instance, it’s cool the way the song’s basic structure, built entirely around eight-bar units, interfaces with the six-bar harmonic ‘loop’ of C-Am-F-Dm-G-Em. In a sense, the song’s entire harmonic progression can be seen almost as the logical outcome of: (a) trying to use the six-bar loop as much as possible; and (b) ensuring that each song section starts on the tonic chord. So the eight-bar intro and chorus sections end up with two extra cadential bars, while the 16-bar verses stick with the harmonic loop right up until that dominant 13th chord ushers in the chorus with “and so it was”.

But the most thought-provoking aspect of this harmonic loop is that it doesn’t sound odd during the verses, where the harmonic pattern disagrees with the phrase structure. In other words, the moment when the harmonic loop returns to the tonic chord, the vocal is only starting the fourth line of its first quatrain. By the time the second quatrain starts, the harmonic loop has already reached the subdominant chord, only settling back onto the tonic for the vocal’s third line. If you look at it on paper, it’s the kind of songwriting concept that most writers would probably dismiss out of hand as a train-wreck waiting to happen… and yet in practice it sounds so natural.

Another aspect of this production that’s undervalued, in my view, is its saturation with melody: the lead vocal’s verse and chorus lines; the Hammond’s lead line during the instrumental section and frequent countermelodies elsewhere; and the bass line’s relentless scalar descent, peppered with tasty chromatic passing notes and well-placed eighth-note fills. Perhaps this is why the track hangs together so naturally?

Or perhaps, as she says, there is no reason…