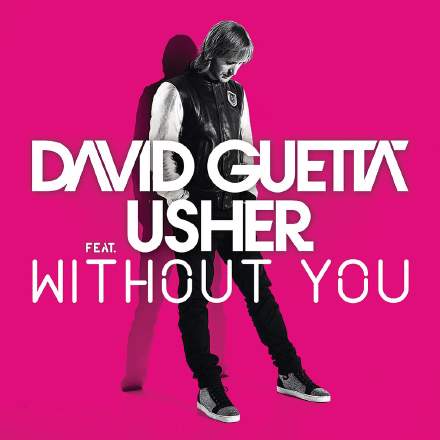 Despite David Guetta receiving top billing here, what really stands out for me is the contribution of guest superstar Usher. Despite some rather ham-fisted tuning processing, I think this vocal is an absolute stunner, carrying the song through two separate minute-long verse sections (0:15-1:15 and 1:41-2:41) with only the scantiest assistance from the arrangement.

This achievement is all the more remarkable given that he has so little to work with: basically four iterations of the same melody per verse, arrayed over a block chord-based backing containing almost nothing in the way of fills or counter-melodies. Engaging the listener with just your vocal line under such circumstances is tremendously tough going. First of all, you have to differentiate each new repeat of the melody in some manner, to keep it sounding fresh, but not so much that you lose all sense of its underlying contour. Then you have to somehow link the individual little vocal phrases so that they generate some momentum through each iteration of the melody, while simultaneously building the tension through all four melodic repetitions of each verse, as well as through the song as a whole. So in this critique, I’d like to just spotlight some of the ways I think he’s doing this.

Let’s deal with the differentiation issue first. From a simple melodic perspective, the first verse only has one major change: the octave shift on the third iteration. As such, Usher actually shows remarkable restraint (for an R&B artist) by resisting a torrent of the usual improvisational curlicues at this point, giving only a microscopic ‘wiggle’ on the final “you” of the second iteration at 0:42 and one isolated flurry on the final “you” of the third iteration at 0:57. In doing this, he prepares the foundations for the second verse in two ways. Firstly, he wisely reserves the expressive fire-power of his virtuoso vocal stunts for the part of the song that needs it most — in other words, where the melody itself might otherwise be sounding a bit dog-eared from over-use. Secondly, he cements the basic melody firmly in the listener’s mind, so that there’s much more leeway to branch out onto alternative lines without anyone forgetting where he started from.

Very sensibly, he hits the first of these melodic detours at iteration six, because its surprise value would have been mostly redundant at the start of the verse, where the switch from the chorus is already enough to demand a significant renewal of audience attention. Similarly, he doesn’t need to deviate from the basic melody as much for iterations seven or eight either — the former makes a statement by shifting up the octave again, while the latter has an ‘ace in the hole’, in the form of a new backing-vocal countermelody, to sustain the interest. That said, the octave shift inevitably isn’t nearly as powerful a device as it was for iteration three, so the high variation of “If you’re not here I’m paralysed” is an inspired move, propping up the emotional intensity for the second phrase by pushing the pitch register to an as-yet-uncharted high extreme.

But it’s not just the pitches that provide the variation here: Usher’s command of a wide range of vocal deliveries is also an important part of the recipe. On the most basic level, the contrasts between his breathier ‘head voice’, more strident ‘chest voice’, and higher falsetto are put to great use. Again, he plays pretty safe for the first verse, with the first two melodic iterations mostly in head voice (although with a lovely hint of chest voice on “game” and “same”) and the second two iterations in chest voice, albeit with predictable falsetto moments on the high A and B notes.

Move to the second verse, though, and things start to get more interesting. First, there’s a break into falsetto for the end of iteration five, followed by a stronger falsetto opening for iteration six, and then some chest-voice in an as-yet-unfamiliar pitch register. Iteration seven then makes a splash with the first chest-voice top A (it’s always been falsetto until now), and subsequent stratospheric falsetto detour, and also gives us a sudden return to head voice (with a flanger effect) for the first “without you”. Finally, a full chest-voice rendition of the whole melody ends the verse, complete with a top B and some impassioned tonal break-up, especially on “blind”. But that’s only the tip of the iceberg, because the performance is simply littered with other great little expressive moments: the guttural “uh” at 0:59; the delay of “fight” at 1:03; the breath-punctuated staccato of “you and I” at 1:05; the long, aspirated onset of “I’m so blind” at 2:28; the matched rhythms of “I lost my heart, I lost my mind” at 2:30… and those are just my favourites!

As for creating the sense of connection within each iteration, this song is an absolute masterclass. Perhaps the best example I can focus on is the very first iteration of verse one, because it’s not aided by any of the histrionics that occur later on. It’s impressive the way the fall-offs of both “win” and “rein” are connected so smoothly to the following breaths, and how he chooses not to put a breath after “game” (despite the considerable breathing demands of head-voice delivery in general), in order to create one long arch to the end of “without you”. And then, even though the delay spins help hold the interest during each of the held “you"s, it’s not without support from the notes themselves. The first, in particular, doesn’t let up (and even blossoms into a tiny vibrato towards its close) until the breath preceding the second “without”.

All in all, it should have been ‘Usher featuring David Guetta’, if you ask me. That said, don’t let that imply that I think David Guetta’s arrangement is completely devoid of merit, because it’s also subtly efficient in its own way, as well as self-effacing in letting the guest star hog the limelight – kind of like a great session player! In particular, I like the way he slowly builds the arrangement with something new for each new iteration of the vocal melody, particularly in the second verse. I love the suggestion of percussion in the eighth iteration, for example.

It’s also a neat little trick to follow up the slow upwards noise sweep with phaser and then highpass filter sweeps, as these great attention-grabbing sonic events simultaneously clear out the low end of the mix so that the kick drum’s low-frequencies really make a statement when they arrive with the chorus.