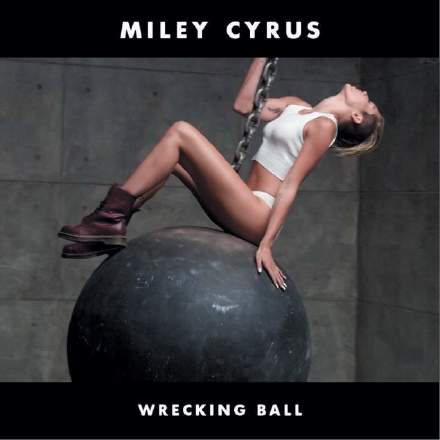 Many small details of this production caught my ear: the vinyl noise layer in the lead-up to the first and last choruses; the hint of brutally high-pass-filtered piano-bass for “we kissed” in the first verse at 0:16, prefiguring the second verse’s proper bass-guitar entry under “it slowly” at 1:10; the graceful ‘opening out’ of the second verse with its layered “oh” backing vocal, cello, and echoey background stabs; and the middle section’s canny ABCD-ABD lyrical structure, which manipulates your expectations to give an extra tug on the heart-strings for “I guess I should have let you win”.

But I have to confess to being less than whelmed by the choruses. Given all of Miley’s bad-girl media posturing, I’d honestly have expected something a bit less safe-sounding, given the title of the song. Take the final work-out, for instance. Yes, the kick is pumping the backing track — big hairy deal! We get it; that’s supposed to make us think the track’s loud. The problem in this case, though, is that the illusion is mortally wounded by the fact that Miley’s louder than God on “I came in like a…”, so the chorus entry sounds rather feeble by comparison (the drums in particular), and then Miley’s levels don’t really pump with the rest of the backing track, making the dynamic effect seem rather fake.

And then there are the “That’s bound to make it sound more epic!” sweeping strings, which couldn’t have been better calculated to render the production saccharine, as well as further homogenising the full chorus texture. Have a careful listen to what’s going apart from the vocal and drums, and ask yourself this: what is actually playing? It’s almost impossible to tell a lot of the time — it’s just a kind of amorphous consonant sludge. It might be an orchestra. It might be a wall of guitars. It might be a rack of synths. It might be a waterfall of monosodium glutamate. It might be all of the above, but whatever it is, it sounds like it was arranged by committee during a conference call between RCA suits. Compare this with something like Katy Perry’s 'Wide Awake' or Rihanna’s ‘Umbrella’, say, and you’ll hopefully hear what I mean — those songs manage to keep a whole lot more power and attitude in the backing without being any the less poptastic. Not that it appears to have hurt Miley’s sales, although presumably those have been driven as much by the video’s soft-porn visual offensive as by anything people’s ears are telling them…

The vocal performance doesn’t exactly thrill me either. While I imagine that Miley’s showbiz childhood has availed her of the best vocal coaches fame can buy, there remains something rather too calculated and one-dimensional about her performance inflections, even when set against various other emotional-blunderbuss divas in the pop and R&B charts. It’s the middle section that most grates on me: here she finishes every single one of the seven lines with an identical falling-whole-step curlicue and exaggerated exhalation. Enough already! Yet, despite plenty of this kind of ‘peel off and stick’ performance frosting throughout the song, she still frequently manages to sound like she’s reading autocue, for example, during the pre-chorus at 0:24 (“Don’t you ever say I just walked away…"), where her dogged adherence to the melody renders her presentation of the lyric totally pedestrian. However adult her racey new image, as a singer Miley Cyrus still has some growing up to do.