Write It On Your Skin 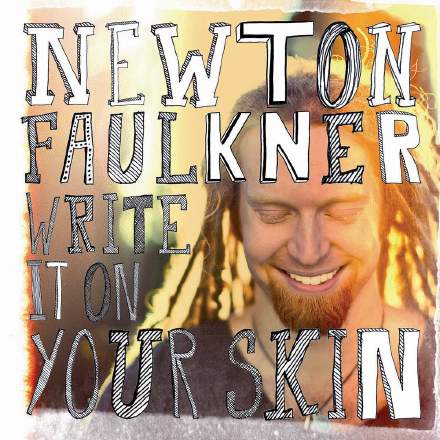 This, the lead single from Newton Faulkner’s recent UK number one album of the same name, makes a rewarding listen for mixing aficionados, right from the lovely vocal and guitar sounds at the very opening. But what I really like is the way mix engineer Ruadhri Cushnan has conjured up a series of tasteful but distinctly ear-catching effect treatments to flag the song sections and keep the basic ‘voice and acoustic guitar’ backbone of the track sounding fresh — especially important given how much musical/lyrical repetition there is between the two verses and three choruses.

The lightest touch of room ambience starts us off, providing a nice natural width and space while keeping Newton close and intimate. Then the smoothly layered vocals of “all the things I’d rather be” move out into the room a little with their panning and heavier ambience (is there some chorusing/widening effect in there too?), supported by a suggestion of increased roominess in the guitar. Despite this, though, the ambience of this pre-chorus section still says ‘small space’ pretty clearly, allowing the full-band chorus texture to make a new statement by opening out into a suitably larger venue.

At 0:57 the automation jerks us abruptly back to what initially appears to be a recap of the close-up first-verse sound, but after a few seconds it’s clear that some subtle additional guitar layers are adding a touch more warmth, not least because they appear to be driving a longer reverb patch — most audible on the left-channel part. As the verse develops further, some nice subtle quarter-note delay spins also appear on the lead vocal, for example on “car”, “far”, “alone”, and “carry on”, but under automation control so that the listener can’t get too comfortable with them.

Following the pre-chorus and double chorus, each filled out subliminally with some subtle extra arrangement layers, the middle section at 2:08 all but stuffs the vocal into a Pringles tube (using some kind of amp simulation, I’d guess) as a moment of foreground ear-candy before the quarter-note delay expands the canvas once more at 2:15 in the run-up to the final choruses, a process continued by the two “let’s start again” counterpoint lines: the first more natural and with stronger reverb at 2:21; the second an ethereal turn with some sort of heavy stereo widening treatment.

And my favourite moment of all: a little twist in the tail at 3:05 after the last chorus, as the full texture shrivels almost instantaneously into the cramped ‘bedroom podcast’ sonics of the last vocal line.

Another thing that I found interesting was that the vocal seems to me to lean slightly to the left at the start of this mix – switching back and forth to mono makes this clearer if you’re having any trouble making up your own mind about it. It doesn’t seem to do this for the second verse, though. Was the off-centre panning intentional? Or are we hearing a guitar+vocals recording where spill on the left-panned guitar mic is pulling the vocal that way too?

The latter is my preferred explanation, and if it’s true then I think it reflects well on the engineering skills of both Faulkner and Cushnan, because both parts sound great to my ears from a tonal perspective, and that’s not easy to achieve when you’re having to manage the spill between mics that are so close together.