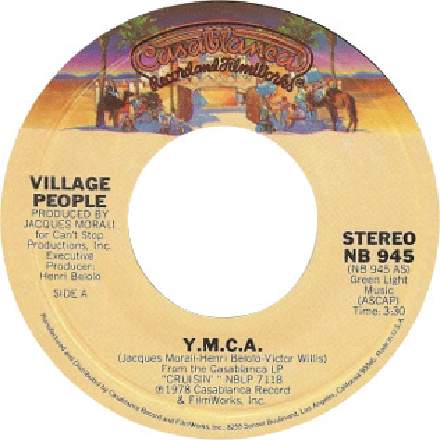 Over the past few months I’ve mixed a handful of project-studio productions where the drummer’s combined a four-to-the-floor kick drum with a snare backbeat, and it’s given me new respect for the drummers of the ’70s. It might seem like a straightforward pattern, but I’ve come to realise that it’s actually far from simple to play consistently and without subtly flamming the kick and snare hits against each other, something that slyly robs the pattern of its trademark rhythmic punch and skipping groove.

Needless to say, this classic Village People production, arguably the last word in disco calisthenics prior to Jane Fonda’s Workout, features some of the tightest hits outside of Ms Fonda’s leotard — the kick and snare remain within about 5ms of each other, well under the 10-15ms that typically starts to sound lumpy in terms of timing. Furthermore, the kick drum is so consistent that you can remove it surprisingly effectively from the mix by polarity-cancelling one section of the song against another, even though there doesn’t appear to be any obvious copy/paste tape-editing going on.

I was so struck by this, in fact, that I actually wondered whether they might somehow have triggered a sample, given that Roger Nichols was pioneering his Wendel drum computer for Steely Dan in the same year this record was released. Having tracked down the widely available online multitracks for the song, however, I reckon that the spill on the kick track puts paid to that theory.

What also struck me from the multitracks is the way the bassist is using his playing technique to make the mixing job easier, for example by brightening the tone for his more melodic moments (eg. the fill at 0:34 or the falling scale at 0:39) to make them more easily noticeable without recourse to fader rides — which would, of course, have had to have been done manually in those days. The exaggerated string slides that lead into each chorus are another highlight, as well the player’s comprehensive use of chromatic passing-notes: A-A#-B at 0:34; B-C-C# at 1:27; C#-D-D# at 1:04; E-F-F# at 1:16; F#-G-G# at 1:15. This ‘no semitone left unturned’ policy works in tandem with the horns/strings arrangement to enliven a strophic song structure that might otherwise be a little short on variety. Of course, in that respect there’s no doubt that singer Victor Willis’s contagious enthusiam is another vital ingredient in the recipe. Like a lot of singers, though, the enthusiasm comes at the expense of a tendency to drift sharp, not that anyone was too concerned in those days before Auto-Tune…