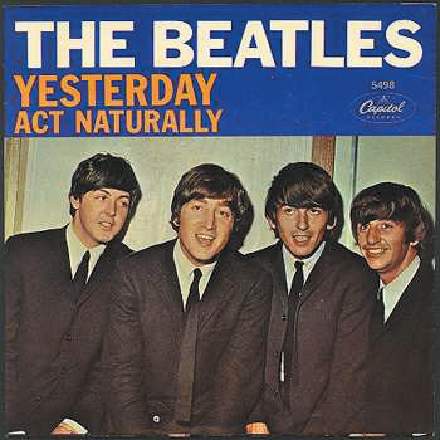 This song has burrowed so deeply into the common consciousness during the last half century that it can be tricky to listen to it with fresh ears. Despite this, however, it remains one of my favourite pop songs, concealing numerous musical subtleties beneath the superficial simplicity of its rhyme scheme, instrumentation, and guitar figurations. Foremost amongst these is the seven-bar phrase that constitutes the verse (first heard with the lyrics “Yesterday… believe in yesterday” at 0:05-0:22), and which, frankly, continues to baffle me! Given the preponderence of four- and eight-bar structures in most pop music, how the hell has McCartney made this sound so natural? If you’ve ever tried writing a seven-bar phrase yourself, you’ll appreciate how difficult it is to make it sound like anything other than an eight-bar amputee. However, the seven-bar phrase in ‘Yesterday’ is so well-crafted that if you attempt to rejig it into an eight-bar phrase it just sounds broken, no matter what you try.

The flavour of falling fifths in the harmonic progression is very strong, and I’d argue that it’s one of the key features which unifies the song’s two different musical sections. In particular, bars 2-5 of the verse and bars 1-4 of the bridge both feel to me as if they’re fundamentally based around the same Em-A-Dm-Gm-C-F backbone (and with the same harmonic rhythm to boot), the former only swapping out the Gm harmony with a strongly related Bb substitute, and the latter simply slotting in a passing Bbmaj7 chord halfway through the second bar under the word “go”. To get a feeling for how similar these sections are harmonically, try singing “all my troubles seemed so far away; now it looks as though they’re here to stay” over the first four bars of the bridge — it fits very snugly indeed. But my favourite thing about all this falling-fifths motion is the way that the Bb chord in the final bar of the chorus wilfully bucks the pattern. Closing the verse on a classic vi-ii-V-I progression of Dm-Gm-C-F would have been the path of least resistance within this context, and it’s wonderful the way McCartney twists this pattern out of shape by altering the G chord to its major mode and then proceeding via a IV-I cadence instead.

From a more technical standpoint, it’s interesting to compare the left and right channels of this mix during the opening guitar-and-vocals section. While the right-hand channel is clear as a bell, the left-hand channel is actually rather honky and phasey-sounding. The explanation for this is that the string players didn’t want headphones while overdubbing, so producer George Martin gave them loudspeaker foldback instead, and its the spill from those loudspeakers that’s colouring the vocal sound in the left channel, as well as shifting McCartney’s voice noticeably off-centre in the stereo image. Overinflated concerns about these kinds of side-effects seem to dissuade lots of project-studio folk from experimenting with loudspeaker monitoring, so I hope that this song helps put such fears into perspective — McCartney’s vocal still sounds great in stereo, and even in mono the phasiness is actually quite benign in practice. Notice also how spill from the original vocal performance (on the right-panned guitar track) can still be heard as a kind of double-track even when the original vocal track is replaced with an overdub for “something wrong, now I long for yesterday” at 0:52-0:59. Again, many SOS readers would probably have recorded the guitar separately in the first place to avoid this — but at what cost to the musicality of the performance?

The decision to use a string quartet rather than a full string section was a great production call for an intimate song like this, and the arrangement also yields a number of hooks in its own right: the rocking motif at “yesterday came suddenly”; the little falling line that leads back into the second verse’s re-entry, and which is later mimicked by the lead vocal; the cello fill after “she didn’t say”, with its exposed seventh; and the five-bar-long high ‘A’ which the violin sustains over most of the final verse. However, I can’t say I like the string sound itself very much — very nasal and buzzy, presumably on account of very tight miking. Some critics will doubtless argue that this rather unnatural timbre actually suits the wistful nature of the lyrics and wards off accusations of mawkishness, and it’s now clearly one of the production’s sonic calling cards (for better or worse), but I can’t help wishing they’d recorded more than about a square foot of each of the instruments in question.

And is that the sound of a door creaking at 0:19 on the string track, just before the ensemble enters at 0:22? Tsk! I ask you! No standards in those days…