by Gerry & The Pacemakers 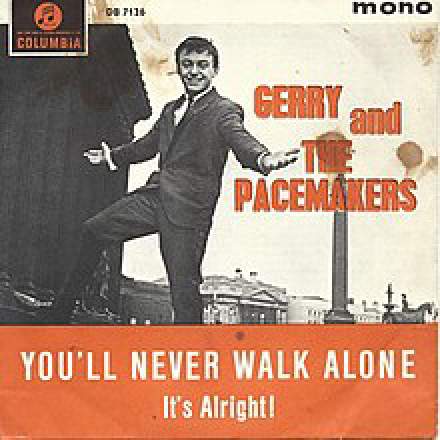 Perhaps fittingly, this football-terrace hymn of stiocism marked the beginning of the band’s downward chart trajectory – although from quite a peak, it has to be said, having spent 11 weeks at the UK number one spot in 1963 despite stiff competition from The Beatles and Cliff Richard! As usual with singles of this era, you can find a variety of more or less mastering-mangled versions online, and although most listeners at the time would have heard it in mono, it’s worth seeking out one of the cleaner stereo mixes, because this was an age when ‘stereo mixing’ kind of meant ‘choose a channel, any channel!’ for each microphone, so you get to hear two separate submixes by soloing the channels. In this case we pretty much get the vocal mic on the right, and everything else on the left.

Listening to the vocal on its own, it’s clear Gerry Marsden was playing the guitar while he was singing, because the mic’s picking up the unmistakeably thin, jangling acoustic sound of his electric guitar’s strings. Now, it’s not unknown for producers to give singing guitarists an unplugged electric guitar in the studio, allowing them to perform as they usually do without their actually having to concentrate on the guitar part, but if you compare the left and right stereo channels after “at the end of the storm”, you can tell that he was genuinely multitasking on this session!

The guitar strumming and spill on the vocal mic also reveal that there’s a good degree of dynamics control going on here. I’m pretty sure part of this would have been compression, but there are moments where the level changes feel dramatic enough that I sense someone’s finger riding the fader during the tracking – a technique that seems a bit scary to us modern sissies with our multiple undo levels, but which was very much stock in trade for recording engineers back then.

The isolated vocal has another tale to tell, because it makes it much easier to hear the two edit points later in the song, presumably where a master take was compiled by splicing together different sections of tape. The first glitch appears just before the final “walk” of the first chorus (around 1:47) while the second happens at the start of the drums build-up six seconds later.

Turning our attention to the rest of the arrangement now, I do particularly like the string parts. Given the slow passage of syllables and the long gaps between vocal phrases, it’s a canny move to have the players interjecting with little fills to sustain the listener’s interest, but the series of increasingly upward-striving leaps that answer the repeated lyric “walk on” from 0:52 onwards is a highlight, especially from around 1:19 where the players play them on a single string, generating not only lovely expressive pitch-slides, but also a warmer, richer tone as a result of placing their left-hand fingers closer to the instrument’s bridge.

All those good things notwithstanding, though, there’s an example of a classic string-direction oversight here too, if you listen closely to the long chromatic run during the build up at 1:53: namely, that the violinists all shift their left hands up towards the bridge too late as they reach the upper register. While this doesn’t cause any wrong notes, what it does mean is that when the violinists all hit their top E string (towards the end of beat three) the tone abruptly becomes very bright and strident. The reason for this is that the lower strings are made of wire-wrapped gut, whereas the top one is made of wire alone, so its lowest few notes in particular sound quite different. You can actually mitigate this as a player by already shifting your fingering hand closer to the bridge while you’re still on the second-highest string, but it takes a little more effort, so few jobbing string players will bother to do it unless specifically directed to do so. (If you’re not a string player and this all seems a bit confusing, I dive into it in more depth in this ‘Strings On A Budget & In A Hurry’ article I wrote a while back.)

Harmonically, there’s more complexity here than in many chart hits of the era, arguably on account of the song’s origins in musical theatre (it’s from Rogers & Hammerstein’s hit 1945 show Carousel). The introduction of chromaticism to the all-white-notes home key is nicely paced throughout the song too: we get Bb as the G chord is chromatically altered to Gm at 0:24 in preparation for modulating to F major; there’s a G# under “lark” at 0:46, and its enharmonic twin Ab in the Fm chord under “through the rain” at 1:02; F# appears in the D chord under “heart” at 1:28; and finally the double-whammy of A# and C# appear in the F# passing under “a[-lone] at 1:36). This is such a canny move for a song which is seeking to creating a rising swell of yearning emotion, as each new chromaticism helps ratchet up the power of the harmonic tension-and-release.

Another thing to point out is that most songs play things safe by sticking to the basic major and minor triads, but here we get both a diminished triad under “wind” at 0:56 (and in root position too, which draws maximum attention to its inherent tritone dissonance) and two different augmented chords: one over a C root (under the second “[walk] on” at 1:22, and 2:00) and the other over an E root (under “[ne-]ver” at 1:33, 1:45, and 2:11). In fact, I’d argue that both those augmented chords are actually the same fundamental chromatically-altered C chord in different inversions, but it’s a contentious case, because augmented chords (like diminished sevenths) don’t actually change their essential ‘shape’ if you invert them – you always just get a root note with major-third and augmented-fifth notes above it. To make up my mind I usually just try substituting more traditional chords into the progression, and for me an (unaugmented) C major chord under “[ne-]ver” feels like it fulfils the fundamental purpose of the augmented chord in the progression better than an (unaugmented) E major chord. But don’t take my word for it. Here’s the progression I’m talking about, with the augmented chord (as it appears in the recording):

And now here are two versions substituting major chords for the augmented chord. Which substitution do you think feels more like it reflects the essential underlying harmonic progression?

You’ll often find that a song’s most interesting harmonies coincide with the harmonic rhythm speeding up (ie. the number of chords per bar/beat increasing), and this song is a case in point. The first moment is under “sweet silver song of the lark”, where we get one of those unusual situations where the melody and bass lines move for an extended period in parallel octaves. Now, I’ve often criticised this kind of thing in the past (for example on Sam Smith’s 'Writing's On The Wall'), so I think it’s important to clarify why I’ve no problem with this case: it’s because it’s been done in a thoughtful and musically appropriate way. In other words, it deliberately repeats this inherently rather directionless voice-leading motion to lend a suitably meandering, wistful air to the lyric at that point. Furthermore, it doesn’t undermine the sense of harmonic ‘arrival’ of any important musical boundaries – in fact, I’d say that the contrast between the harmonically drifting parallel-motion section and the subsequent C7-F perfect cadence actually enhances the sense of release for “walk on” at 0:52. In other words, what for most songs is a bug, Rogers & Hammerstein have turned into a feature. Furthermore, I’d suggest that if you view the mid-bar Am and F chords as passing chords, then that progression actually forms a logical part of a larger falling-thirds root-note sequence starting on the F chord under “golden sky” at 0:34 and finishing on the dominant C chord – in other words a chord-per-bar pattern of F-Dm-Bb-Gm-E-C.

However, I do have a bit of a bone to pick regarding the second occasion where the harmonic rhythm speeds up: for “never walk a-” at 1:31, where we get the rousing build-up of tension as Gerry holds his E against the underlying C-Eaug-F-F# progression (and against that glorious rising chromatic G-G#-A-A#-B line in the violins). What always disappoints me is that the powerful upwards drive of the bass line kind of fizzles out when we finally arrive at the syllable “[a]-lone, because it falls back to E (giving a rather weak mediant minor chord) rather than continuing on upwards, to the dominant say. Now, I’ll grant you that proceeding to G there would mean holding a dominant chord for two whole bars until the resolution to C on “ne[-ver]” at 1:43, but that wouldn’t be a difficult problem to solve with some kind of suspension, for example. And I’m clearly not the only one to share this concern, because a quick Youtube search brings up plenty of other versions of the song, pretty much all of which seem to choose an alternative approach. For instance, there are version from Doris Day and Tom Jones which both use a variant of the dominant chord there, as did that recent charity single with Michael Ball – which, incidentally is otherwise one of my least favourite charity singles ever in production terms, despite the undeniable worthiness of both its beneficiaries (NHS staff) and its figurehead (the late Captain Sir Tom Moore), but that’s a critique for another time…