You're The One That I Want 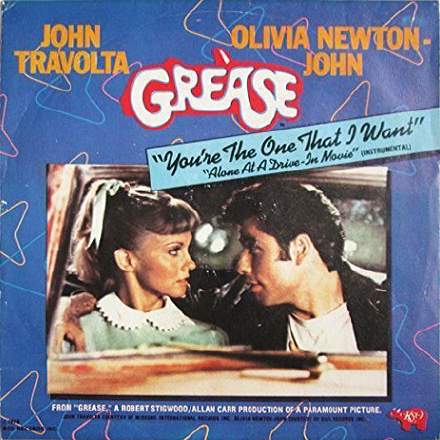 Although Saturday Night Fever just beat Grease to the top of Billboard’s end-of-1978 album chart, this single has since outsold anything by the Bee Gees. Written specially for the musical’s film adaptation by Newton-John’s producer John Farrar (apparently despite the director’s reservations), it contrasts a minor verse against a major chorus — something that, sadly, is pretty rare these days. The real star, though, is that tremendously tight-sounding rhythm section, because of the extraordinary musicality of each of its constituents. The bass part, for instance, is so strongly melodic, and played with such unfussy sensitivity, that I’d happily listen to this song with the vocals muted without feeling short-changed. There’s simply no ego at all in there, just bucketloads of style and taste that elevate the whole song. Imagine how much less appealing this would have been had the bass stuck to simple half notes, say. It hardly bears thinking about! (Shame about the missing note at 0:33, though. Let’s call it a beauty spot…)

What a pianist too! When there’s space during the intro and verses, a series of cool keyboard licks are delivered with easy panache, but he’s also happy to surrender the foreground at a moment’s notice, for example when the vocal first enters at 0:08 or when we get that crunchy ping-pong delay spin on “electrifying” at 0:23. Then, when the prechorus and chorus sections demand more rhythmic drive, we get selflessly efficient vamping with zero superfluous riffage.

The drums are also super-focused, both in terms of their firmly damped ’70s timbre, and because the drummer stays locked into the core groove, delivering section contrast not by dramatic pattern changes but by subtle adjustments in presentation — a few more kick-drum skip-notes as we move into the prechorus, and a slightly more open hi-hat for the choruses. And, of course, this means that the handful of fills really pack a punch. There’s no better example of this than the double-snare at 0:26 and 0:35, hammering home those sassy “you’d better shape up” lyrics. (Incidentally, is that a hi-hat overdub under the “ooh, ooh, ooh” at 0:54, or did the drummer have hats on both sides of the kit? My money’s on the former. I reckon the piano glissandos are probably overdubs too, judging by the simultaneous piano vamping you can hear in the stereo Sides signal.)

Compared with micro-edited modern duets (think Zac Efron & Zendaya’s 'Rewrite The Stars' or Shawn Mendes & Camila Cabello 'Señorita'), it’s refreshing to hear the natural timing characteristics of the two leads here, particularly Travolta’s tendency to rush during the choruses. This could easily have undermined the song’s groove had the backing band’s rhythms been anything less than rock solid, or had his voice been any louder in the mix, but as things stand I think his pushing the beat actually enhances the song’s sense of urgency and excitement. Who’d have the courage to leave that kind of thing unedited these days?