by The Righteous Brothers 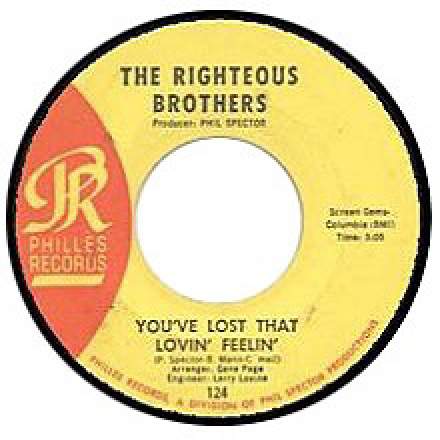 There seem to be a number of different stereo mixes of this track doing the rounds, but it’s worth shopping around for one that uses extreme LCR panning for the original tape’s three tracks. For one thing, this offers the opportunity to compare the arrangement with and without the right-panned strings overdub, simply by toggling the right channel on and off. Personally (at the risk of committing some kind of production heresy) I reckon the song would have been sonically more powerful without the strings (albeit bereft of the orchestral conceit), but from an arrangement perspective they serve to differentiate the second verse from the first, as well as salvaging several nice flute countermelodies/fills (eg. 1:04, 1:15, 1:29, and 2:54) which would otherwise have been submerged without the support of the strings doubling.

Speaking of which, what I’ve always wished had been submerged is that tambourine! While it does do a good job of calling attention to the production’s characteristic all-pervasive 16th-note echo, it’s also bloody loud, easily overpowering the (fundamentally more interesting) drum kit and horns of the backing arrangement (eg. at 2:27) and generally grating on my ear. In that respect, the restricted-bandwidth radio listening experience typical of the era probably served the musical balance of this song a lot better than current CD releases do — and would likely also have concealed the selection of more-or-less random sub-50Hz thuds in the mix’s left channel. (Check out the two occurrences just before the second verse at 0:56, for instance, which sound like someone bumping against a mic stand.)

If you switch off the right channel, on the other hand, it opens up the lead-vocal parts to greater scrutiny, especially during those sections (eg. 0:00-0:22 and 1:45-2:24) where the strings are silent. The rich low end of the verses and the smoothness of the reverb tail are particular highlights, and it’s also remarkable how important a role distortion plays in the vocal sound once the performance intensity increases. The “lovin' feelin'” at 1:42 is a particularly stark example, but there are many less extreme instances, and I think the distortion is actually part of what gives these vocals the harmonic density and upper-mid-range presence they need to cut themselves a suitable embrasure in Phil Spector’s celebrated ‘wall of sound’.